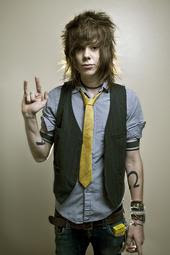 Joplin, Missouri’s Christopher Drew is the creative force behind Never Shout Never, the latest in a long line of MTV-friendly post-punk pop bands to hit the national stage. With media features by outlets such as Alternative Press, Billboard Magazine, AMP Magazine as well as a 2008 performance on MTV’s TRL, Never Shout Never is nicely positioned for a big year. The Summer EP, recorded in early 2009, was recorded by Forrest Kline of HelloGoodbye and mixed by Jon Kaplan (Good Charlotte, LL Cool J, The Starting Line). The EP also features a cameo from Limbeck’s Patrick Carrie (I Just Laugh).

The Summer EP opens with Happy, a bright and cheery acoustic pop song. Drew has a distinctive voice with a strong and clear falsetto sound. The song itself is very catchy. I Just Laugh is a catchy brand of folk/geek/pop that will keep intruding into your head. On The Bright Side is highly quirky and highly infectious. This is one of those songs you just have to sing/hum/whistle/tap along to. You won’t be able to help yourself. Losing It is the best composition on the album; a wonderful pining love song that will be familiar to anyone who’s lived through adolescence. You’ll also want to check out the other two tracks, Hummingbird and Simple Enough.

Never Shout Never is the sort of different that will get significant attention, similar to how the Counting Crows first caught on when they came on the national scene. Vocalist Christopher Drew has the advantage of sounding like almost no one in pop, although comparisons could be made to John Ondrasik and Adam Duritz. The Summer EP will do great things for Never Shout Never. Expect to start hearing that name a lot more in the not-too-distant future.

You can learn more about Never Shout Never at www.myspace.com/nevershoutnever. You can purchase a copy of The Summer EP at Amazon.com. Never Shout Never will be part of mtvU’s Sunblock Festival Tour along with Boys Like Girls and Gym Class Heroes this summer, as well as playing on the SmartPunk stage on the Vans Warped Tour from July 20 – August 9, 2009.
Posted by Wildy at 5:41 AM

I love him. he's an amazing songwriter/singer. I adore the song Simple Enough and cannot stop listening to the truthful words of On The Brightside. I give The Summer EP 5 million stars.

A great deal of effective info for me!