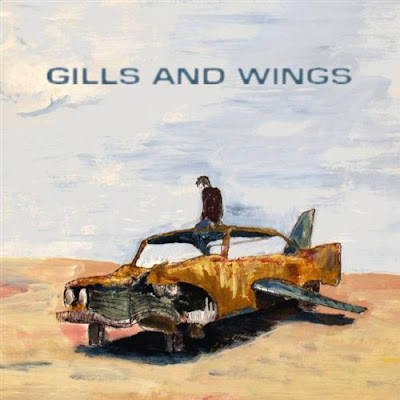 Gills And Wings was born in Miami Beach, Florida, from the songwriting partnership of Danny Reyes and Santiago de la Fuente. The pair moved to Virginia Beach to work with guitarist Alex McCallum (Jason Mraz) and added bassist Matt Hulcher and drummer Andrew Hackett in the process. Together, the quintet has gone to create music with the ethereal air of Radiohead or Coldplay and the glam of Bowie or Queen. Gills And Wings, the band's debut EP, serves as a throwing down of the gauntlet to the next generation of rock stars. Gills And Wings have arrived.

Breaking out of the gate with the sort of melodic glam Queen was known for, Gills And Wings breaks the glass with Rebirth Of A Nation. Guitarist Alex McCallum even captures some of Brian May's signature guitar sound, and vocalist Danny Reyes is a fair approximation for the vocal style of Freddie Mercury without being a sound-alike. Rebirth Of A Nation is about changes in the US and is delivered in sarcastic overtones, contending, perhaps, that the "rebirth" in this case may not be for the better. Catastrophe falls into the category of "mellow glam"; Reyes' voice drives this angst-filled number about letting your mouth get you into trouble. Solitude carries the same sort of heavy Baroque feel, but is perhaps a bit less accessible than the rest of the EP. On The Dealer, Gills And Wings offer up the viewpoint of a flawed man doing his best to show broken people love of a sort. The vocal performance is chilling, and the song is compelling for both its humanization of a social archetype and willingness to step outside of the politically charged conventional view. The song is amazing, showing a rare gift for capturing a person, place or moment in song. Gills And Wings closes with Circus, an infectious Pop/Glam number that will get stuck in your brain and stay there for days.

Gills And Wings have a sound with enough Prog and Glam in it to be considered Retro but are fresh enough to fly fans of Modern Rock and Pop. You'll hear Freddie Mercury comparisons regarding MLV, and they aren't unfounded, but Reyes lays himself out in his voice in a way that is highly personal and rarely found in a vocalist who is simply mimicking another. Gills And Wings have a very bright future. The self-titled EP is a great start.

it's too bad that when they play live, they have to listen to their pre-recorded tracks to get it right. kind of funny to watch them wait while the drummer queues up the next song in the macbook.

They use electronic drums, not pre-recorded sequences. But, then again, you thought an MPC was a Macbook, so you're forgiven. So, why make up shit? Is it jealousy?

i don't need to be jealous of fake-killers bs.

Also, i think it's funny that older photos of G&W have been removed from sites, so the burden of proof is on you, band member. i know what I saw, and yawned through, while the rest of the band stood quietly waiting.

And why do you need electronic drums when you have a drummer? Metronomes are way cheaper if you need them to stay in time.

It won't truly have success, I believe so.