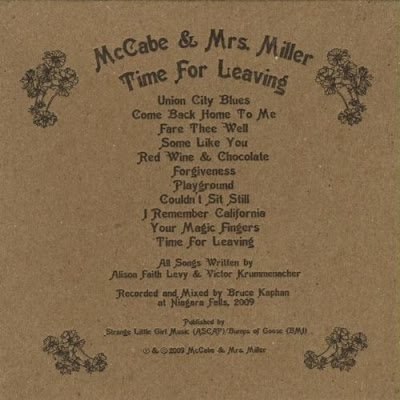 McCabe & Mrs. Miller is the nom-de-guerre of the union of Victor Krummenacher (Camper Van Beethoven, Monks Of Doom) and Alison Faith Levy (The Sippy Cups, The Loud Family), taken from the 1971 Robert Altman film. The two have played together over the years between projects, but decided in 2009 to formalize the partnership. The resulting album, Time For Leaving, features deep influences from the worlds of Folk, Country, Americana and Rock N Roll. Krummenacher provides a somewhat grittier facade, while Faith Levy comes across as worldly-yet-demure on a quietly exciting album that should make some impact on the Americana charts.

Time For Leaving opens with the energetic yet low key instrumental Union City Blues. It's a soft segue way into an album ripe with Americana, Folk and Country accents. Come Back Home To Me is a plainspoken entreaty born of love and need. The song is steeped in a beautiful arrangement, and Alison Faith Levy has a gorgeous voice. Fare Thee Well takes a pragmatic look at moving on from the perspective of the one about to be left behind. The song is well-written and the performance is gritty and melodic. Playground is sultry and playful and leaves little to the imagination; done up in a jazzy arrangement that's a fun tease.

On Couldn't Sit Still, McCabe & Mrs. Miller wax poetic on love and its costs. The song isn't so much forlorn as matter-of-fact in its cynicism. I Remember California is solid Folk songbook material, a remembrance of times gone by in everyman terms. Faith Levy takes flight on Your Magic Fingers, a classic country song in the old Nashville style that sounds like it could have been featured at one time on the Grande Ol' Opry. Time For Leaving closes with the title track, a sublimely melancholy tune that is something of an ellipsis for an album with a timeless feel, as if suggesting the cycle of songs is something that repeats as regularly as human love and human heartache.

Time For Leaving isn't an album that bowls you over. Krummenacher and Faith Levy emanate the relentless feel of life with songs that chip away at your psyche like desert winds over a rocky butte. The brutality and grit of a hard life mix with its minimalist rewards in the words and notes of McCabe & Mrs. Miller. The result is exultantly melancholy, a treat for the ears.

You can learn more about McCabe & Mrs. Miller at http://www.mccabeandmrsmiller.com/. You can purchase Time For Leaving as either a CD or Download from Amazon.com.
Posted by Wildy at 5:41 AM