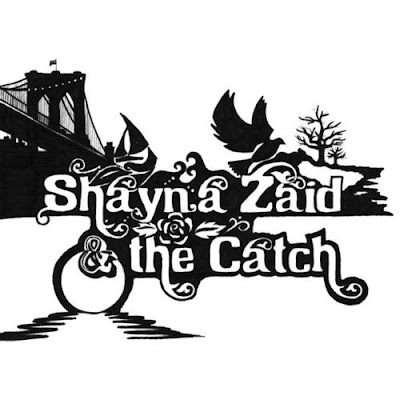 Shayna Zaid has been a television personality and recording artist since the age of twelve, and has developed a stage presence that can't be taught. Her smoky voice and enigmatic style mix with an extreme talent for writing lyrics and a sense of melody and arrangement that are far above the norm. We reviewed Zaid's debut EP, Au Fait, in 2008, and were wowed by her songwriting and persona, but Zaid continues to develop her craft. Her latest effort, Shayna Zaid & The Catch [EP] features band mates Joel Dean (guitarist/producer); Christopher Heinz (drums), Danny Stone (bass) and Yan Izquierdo (violin) in a wonderfully coherent and Pop-influenced post-genre album you have to hear to believe.

Zaid opens with Morning Sun, a bright, airy Americana tune offered up in acoustic format. Zaid's complicated, sultry alto is full of texture and personality that leaps out of your speakers. You can't help but move to this music; a celebration of each and every new day. Just Because, one of three carry-overs from Zaid's Au Fait EP, is pure infatuation in song. Zaid proves herself a master lyricist, putting thoughts into words that slip into your brain as if they were your own. This is a song that mooning teenagers (and none too few adults) will name their mix tapes after. Closer is a fluid love ballad written to one who is far away. It's buoyed by a gorgeous melody and lyrics that flow like water; written in sweet and sensuous phrases without becoming cloying or cliché.

The highlight of the album, perhaps of the century (thus far), is Fireflies. If Zaid's purpose was to attain Pop perfection, she can quit now and go home. Fireflies is Brilliant (note the capital B). You can't teach a moment like this, but anyone out there who has ever written a song or dreamed of written one needs to listen to Fireflies and take it in. Fireflies is the view of a new love as seen through the eyes of your best girlfriend and practically bubbles over with exuberance. Zaid captures a moment in words with the fluid grace of Johnny Mercer, pairs it with a melody that simply won't leave you alone and wraps it all in arrangement that frames the song in perfect light. Pure poetry in music is what you'll hear "when his name slips through your smile wider than the river Nile, then it's love... bet he'd drive a million miles just to see you for a while, then it's love. Fireflies... light up the night."

It's You is another bit of Mix Tape Magic; a devotional written with nothing held back. Zaid sounds like a cross between Norah Jones and Tina Turner here; the combination is gripping and the song is as emotionally raw as you could imagine. Bonita could be a song of love or support; sweet and loving either way. It's a light and airy arrangement that's very danceable. Zaid closes with Blow, a powerful, driven acoustic arrangement about the perils of cocaine laced with gypsy violin ala Joe Venuti. It's more of a character sketch in song, a brilliant take that sounds like it might have come from a Tarantino film (or perhaps a song he might choose to write a film about).

When I reviewed Shayna Zaid's Au Fait EP I knew she was a formidable talent, but she's upped the ante seriously in the mean time. I don't think it's any kind of stretch to start including Zaid in discussions of the best songwriters working in Indie Music. If it were just Fireflies you could make the argument that any songwriter can strike brilliance once, but there are no less than three songs here that are exuberant ten out of tens, and there's not a smidgen of mediocrity in the bunch. If Zaid has any shortcomings commercially it will be that she doesn't fit into a neat marketable package, but will fit nicely into a lot of niches, similar to artists such as Lyle Lovett, Randy Newman, Jeff Tweedy and the still rising Marian Call. Shayna Zaid & The Catch have magic in a bottle; magic of their own making. Shayna Zaid & The Catch [EP] is a Wildy's World Certified Desert Island Disc.

To my mind every person have to read it.