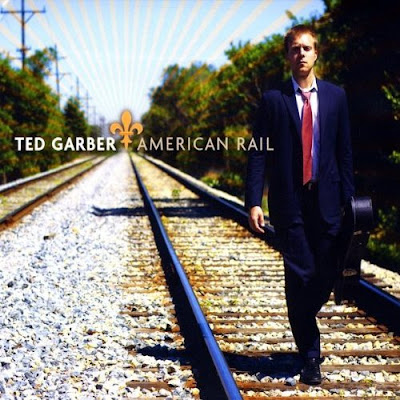 Ted Garber cut his teeth on the street corners of New Orleans, busking while a student at Tulane University, but performing has always been in his blood. Garber's father was a long-time regular on the Washington D.C. folk scene, and Garber grew up with a desire to be on stage. Garber's mix of Folk, Blues and New Orleans style R&B captivates audiences with both its refreshing honesty and musicality, drawing collaborators from bands such as Eddie From Ohio, Junkyard Saints and Last Train Home. Garber's latest album, American Rail displays the everyman grit of early Springsteen and a musical creativity that is both intriguing and surprising.

American Rail opens with It's About Time, a raucous mix of Blues, Soul and Rock N Roll that's highly danceable. Garber has an eccentric baritone voice that is engaging and pleasant to listen to. Break Me Down is an energetically mellow tune about losing yourself in another while setting boundaries to keep that from happening. Garber hits on a vibrant samba beat with virtuosic Latin guitar riffs on Montevideo, sounding like he's having a ball with the song. I should note that the entire band behind Garber sounds engaged at a high level; this is one tight unit that enjoys playing together.

Strike It Up is a solid blend of Rock N Roll and Soul, complete with Stax-style horns and a chorus that you can't help but sing along to. Strike It Up is the sort of song that gets a crowd moving, and Garber sounds at his very best here. Giving Tree comes back to a mix of Funk, Soul, Blues and Jazz that you could only be from New Orleans. Garber and band mix it up here with delicious results, guaranteeing dancing feet in any crowd. Waste Some Time is another highly catchy Rocker with Soul and Blues in its lineage. Garber seems to have a talent for these catchy tunes you just can't get out of your head. Live shows have to be absolutely insane.

March Of The Working Class Hero is in much the same vein: Great rhythm, catchy arrangement, high speed lyrical flow (ala Jason Mraz) and an insane need to dance/sing along. A Lot Like Me is a song about looking back at the follies of our own youth; with the realization that things work out alright in the end. It's an incredibly tuneful and catchy tune and will resonate with anyone who's old enough to share its perspective. Garber closes with Another Monday, an energetic Rock N Soul tune about getting through the weekend.

If you could splice the DNA of Dave Matthews with that of Rob Thomas, adding in a dose of Taylor Hicks and Jack Johnson, you'd end up with an artist not entirely unlike Ted Garber. Smart, tuneful songwriting combined with a memorable voice and a band as tight as the gates at Fort Knox make for highly enjoyable listening on American Rail. This is music you can listen to with friends, and it might just turn into a party.

You can learn more about Ted Garber at http://www.tedgarber.com/. You can purchase American Rail as either a CD or Download via CDBaby.com.