Review: Chasing Kings - The Current State Of Our Future 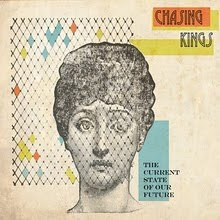 Malibu, California's Chasing Kings have their origins in a friendship that started in sixth grade. Matt Schwartz (vocals/keys/guitar) and Drew Beck (guitar/vocals) began writing together in their early teens and moved to Malibu in 2006, where they added Nick Sandler (drums) and Mike Goldman (bass/vocals). All still in their teens, Chasing Kings bring their brand of remarkably mature and polished Pop/Rock to their debut EP, The Current State Of Our Future.

Chasing Kings open with a tremendous piece of dark, brooding Pop music in Empathy. The melody here is certain to keep you interested and make you want to dance. The Current State Of Our Future is a song written loosely about the future from the perspective of someone who has little idea how they might fit into it. The song shows both the naivete and cynicism of youth, certain about what's wrong but not really having a clue about what might be right. It's an intriguing tune with a light airy chorus masking a dark well of melancholy and uncertainty underneath. An Empty Handshake is a diatribe against the social habits of society, particularly in a celebrity-based business such as music. Falsehood is called out in an arrangement the recalls Radiohead. This Town was somehow both driven and bland at the same time, but Chasing Kings recovers nicely with Dark Sunglasses. Dark Sunglasses opens with delicious interplay between guitar and keyboards and has a lurking pop sensibility that will make you nearly want to dance. Chasing Kings closes with All My Life, an adequate closer that seems a bit anti-climactic in light of some of the other material presented here.

Chasing Kings shows a real aptitude for writing peppy yet emotionally-loaded rock songs with stirring melodies and a Radiohead/Coldplay ambience. The Current State Of Our Future is a bit uneven at times, but an intriguing introduction to a band with a bright future.

You can learn more about Chasing Kings at www.myspace.com/therealchasingkings or http://www.chasingkings.com/, where you can purchase a copy of The Current State Of Our Future on CD. Digital versions are available from iTunes.
Posted by Wildy at 6:52 AM

No doubt, the chap is totally fair.