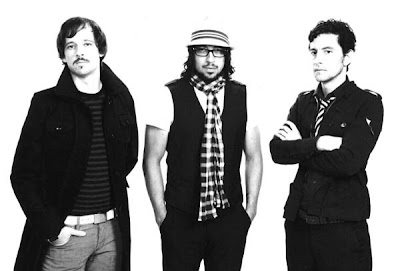 Saints Of Valory formed in Atlanta, Georgia in late 2008, but Godfrey Thompson and Gavin Jasper were both established professional musicians before the band came along, allowing the band to transition quickly from inception to gigging to recording and releasing an album. With roots in classical and film scoring, Jazz, Latin and Rock N Roll, Saints Of Valory were bound to create some interesting and unusual sounds. That's why it's no surprise that the band's debut, self-titled EP is so compellingly good.

Saints Of Valory opens with Love Junkie (Drama Queen), an off, off-kilter heavy rocker with distinct Pop sensibilities. This is dark and elusive Rock N Roll that remains accessibly by planting itself firmly in your forebrain and refusing to vacate the premises. Mary-Go-Round has a compelling, edgy sound that's part Brit-Rock and part Arena Rock. Vocalist Gavin Jasper is enigmatic but perfect for this setting. Crash Monday straddles thin buffer between Classic Rock, Modern Rock and Pop with a danceable mix that's fresh and exciting. This is the best tune on the album, and don't be surprised if sooner or later it turns into a big commercial hit for somebody. Saints Of Valory closes out with two live in studio tracks. The first, Nowhere To Land, makes me think of what U2 might sound like if they came along twenty years later, while Stay Wild is a classic big Rock anthem. The wide open arrangement and instantly likeable melody would sound perfect in a stadium filled with 80,000 screaming fans.

Saints Of Valory are the real deal, a big-time rock band that's comfortable in its own skin and not trying to be anything other than what they are. If you get a chance to see Saints Of Valory live I highly recommend you make the effort. In the mean time, this is an essential debut album. It's perhaps not quite Desert Island material, but I wouldn't be surprised if Saints Of Valory turn out their share of Desert Island discs in their time.

You can learn more about Saints Of Valory at www.myspace.com/saintsofvalory. No online outlets were noted for the Saints Of Valory EP. You can stream the songs on the band’s MySpace page.
Posted by Wildy at 5:57 AM

Labels: The Killers, U2

Actually the Saints of Valory formed in Rio Brazil. Great band, great group of guys. I got to interview them in depth. Here's the article in case you are interested: