Review: Anna Coogan - The Nocturnal Among Us 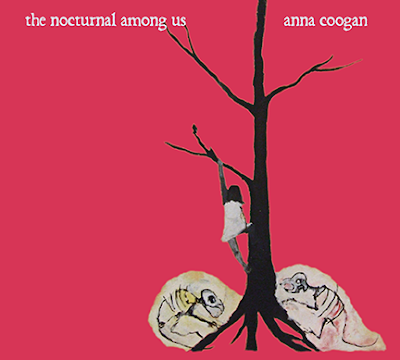 Anna Coogan - The Nocturnal Among Us
2010, Anna Coogan

Seattle’s Anna Coogan has one of those voices that haunt you. There's a lonesome quality there that is entirely compelling, and Coogan know how to place her voice to fullest effect in arrangements that both frame and feature it in the best light. The Seattle singer/songwriter has been delighting audiences since she first started writing in 2002, and has released two albums to date that have won critical praise. On March 2, 2010, Coogan steps fourth with her third album, The Nocturnal Among Us. Written in the depths of two Seattle winters, Coogan waxes poetic on the sort of growing up we start to do once we think we've grown up. Getting married, becoming a responsible adult and the perspective of mortality all come into play. Produced by JD Foster (Calexico, Dwight Yoakam, Patty Griffin, Laura Cantrell), The Nocturnal Among Us is Coogan's best work yet, and will serve to cement her reputation as both a songwriter and performer.

Coogan starts off on the right foot with Back To The World, wrapped in a simplistic arrangement that allow the melody and ambience of the song to pour out in buckets. On Dreaming My Life Away, Coogan sounds like a classic Country crooner working a rock song steeped in melancholy. The vocal harmonies around Coogan are amazing, helping her to commemorate the sort of existential crisis that's a trademark of the human condition.

Coogan documents the cycle of a relationship from happiness to heartache on Crooked Sea, a dreamer's tale of love gone wrong told from the worldly perspective of one who thought it might come out like this all along. It's an amazing piece of songwriting and performed right to the cusp of perfection. Escapism reigns on Take The Sky And Run, a possible epilogue to Crooked Sea that's sharp but perhaps one of the weaker songs on the album. Love Again is a song of renewal; finding the will to get past the pain and live again. It's tuneful and well-written and Coogan wears it like a glove.

The highlight of the album is Holy Ghosts Of Texas. I'm not even going to go to great lengths to describe the song, as I suspect it's more a matter of how the song touches you than anything else, but it's powerful songwriting and Coogan is at her vocal best here. The song itself is an instant classic; the sort that other artists are likely to find and cover over time. So Long Summertime finds Coogan entering the Folk/Pop mélange of Natalie Merchant. It's a great listen that's easy on the ears and will recall Merchant's early days with 10,000 Maniacs. Coins On Your Eyes is something of a morality tale about figuring out what's important in life before it's too late. The song is delivered in a loving tone to someone whom Coogan knows will likely never change, and has a dark beauty that's full of love, a need to do something and the knowledge that nothing will ever be enough. Coogan says goodnight with The Nocturnal Among Us, a sad, pretty closer that serves as a musical mood desert for what's come before.

Coogan floored me from the opening notes of The Nocturnal Among Us. Her voice is truly something special, and Coogan has a talent for phrasing that's somewhat rare in Pop music. Coogan also is able to write and perform music that sounds 100% authentic, honest and from the heart. If she chooses, Coogan's going to be making music the rest of her life. Talent like this screams to be used.

You can learn more about Anna Coogan at www.myspace.com/annacoogan. The Nocturnal Among Us drops March 2, 2010.

Thanks so much for your post, pretty useful information.