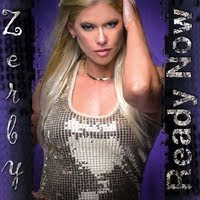 You might find it hard to believe that one of the hottest Reggae Dancehall deejays on the scene is a blonde female from the Midwest United States. If that's the case, you've yet to meet Zerby. Zerby spent a number of years living in Kingston, Jamaica, where the Amazonian blonde stood out for both her appearance and her musical skill. Zerby has share stages with Beenie Man, Sean Paul, Bounty Killer and Maxi Priest; her music has been featured on Ugly Betty and in the movie Mo. On January 12, 2002, Zerby released her second album, Ready Now on her own Hotness Records label.

I'll be the first to admit that I am not an expert on Reggae music or many of its offshoots (such as Dancehall), but I'm very open to the genre, having heard material I like and material I do not. Reading a bit about Zerby's back story can incite real anticipation in those who have not heard her before, but Ready Now (her latest album), doesn't necessarily cast the artist in the greatest light. One of the most aurally attractive aspects of Reggae and Dancehall is the melodicism, much of which is AWOL on Ready Now. Zerby is, in essence, a yeller. The songs on Ready Now vacillate between Dancehall, Rap and solid Rock arrangements. There are even a few tracks that play clearly in the electronic/dance genre, but Ready Now in general was not an album I would suggest as required listening.

The opening track, Why Should I, is the highlight of the set. Zerby pulls in rap on Ready Now, relying on repetition to banish space left bare. Where Ya Get It From is highly repetitive and annoying. This is the sort of song that does really well on the club music scene as it's almost entirely rhythm and carnal in nature. Potential dance hit, but not overly listenable otherwise. The paucity of original thought continues on Veteran, a full-length swipe at Dancehall artist Spice, who is rumored to have no respect for veteran artists. It's essentially a school yard call out like those that are common in the Hip Hop world. It's a song I personally could have done without on the album; it essentially does little other than to lower Zerby's likeability factor.

The rest of Ready Now is up and (most often) down. Only Just Begun is decent if average songwriting and offers up some congenial sounds on Zerby's behalf, whereas Better Than Dem engages in Dance/electro braggadocio. Better Than Dem is a likely Dance hit if pushed in that direction and a likely skip if you're in it for the musicality. On Stop War, Zerby visits the same sort of faux-protest song lyrics that have become so commonplace in the past few years. It sounds like the music here was recorded at 16 RPM and replayed at 33 RPM, distorting the arrangement in Fun House style. Zerby makes a last gasp with Good To De Go, a catchy number that remains awkward nonetheless.

Ready Now suffers from a lack of musicality and charisma, a combination that will keep the album inaccessible to all but the most hardcore Dancehall fans. The yelling, near-angry vocal style and general lack of a pure melodic sense make Ready Now a difficult listen. There are nuggets here worth saving, but I don't see the album as a whole having a great deal of commercial impact.

You can learn more about Zerby at http://www.zerbymusic.com/ or www.myspace.com/wwwmyspacezerbymusic. You can purchase Ready Now as either a CD or Download from CDBaby.com.
Posted by Wildy at 5:30 AM

Thanks so much for this article, pretty useful material.