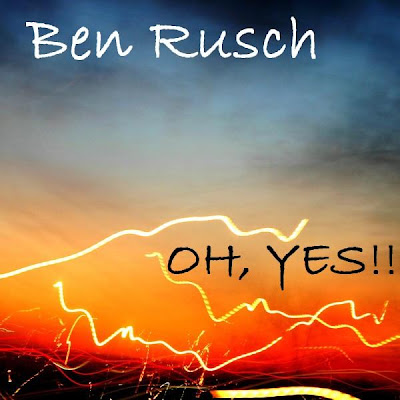 Ben Rusch is a London-based award-winning singer/songwriter. You might not have heard of him if you don’t live in Western Europe, but he’s cranked out 16 full-length albums as an Indie artist, won or nearly won several major songwriting awards, and enjoys extensive radio airplay in Germany. Rusch draws on a wealth of influences and perspectives to create nuanced, balanced Rock N Roll that not only entertains and provides great melody but also tells a story. Nowhere is this clearer than on Rusch’s latest effort, Oh, Yes!!

Rusch opens with Fissile Isle, featuring an intriguing piano-based Rock sound that's not too many steps removed from Ben Folds. The low-energy vocal style is a matter of necessity for Rusch, but works perfectly with his non-conventional writing style. The Daily Mail displays so highly inventive song construction and a brilliant keyboard solo during the bridge. The Daily Mail might not grab you on the first listen but will keep picking at you with each successive spin. Ray By Ray is an absolutely gorgeous tune framed by piano and guitar. These two instruments create a safe space for a melody that will haunt your subconscious to come out and play. It's a love song that eschews current trends and revisits love as a romantic concept in terms of time and place.

Ode To Your Body is a brainy love song, ala Big Bang Theory. This song is ridiculously catchy. As Good As It Gets will sound familiar to anyone who’s ever involved with someone whom you've suspected is secretly psychotic. Lost any time lately? This song will frighten you. Metaphor Pilot is a love song ensconced in deep imagery that doesn't neglect the more difficult aspects of love and relationships. The song is wonderfully written.

The Lament of Catskin Arnold is a collegial lament for the prodigal son, where the family is the cast of characters at the local pub. The Ghost Of You Is In The Heart Of Me is a highly personal and literate memoriam in song. It's the Poet Laureate of Indie Rock at his most explicit. Maud's Ecstasy At The High School is a transcendent song. Rusch casts aside the petty whims of genre to create magic. This is one of those tunes you never shake; twenty years from now you'll be walking down the street somewhere and this melody will suddenly run through your head. You might not remember who Ben Rusch is or where the song came from, but the song is utterly brilliant. Rusch gets inside what might have been the crowning moment in one woman's young life with a prescience that's mystifying.

Rusch hits a wonderfully angular sound reminiscent of Ben Folds on Parachute Of Sound before sliding into a satire of the "American Idol" culture and the one-dimensional pop stars it engenders on The Pop Diva Trajectory. Rusch is too smart for his own good and funny to boot (and it's not a bad arrangement either!). The next two songs might indicate a serious penchant for the band Yes. Bass Guitars in Heaven finds Rusch channeling Chris Squire on what sounds like a Yes outtake. The End Of Time features Steve Howe-style guitar work in rhythmic pop tune about how to spend the waning moments of life. It's a great listen. Rusch winds things up with The Masochist Song, a humorous tidbit from a wonderfully disturbed mind. This one dances right over the edge of novelty, but it's definitely worth dancing on the edge for.

Ben Rusch brings high-brow Pop music to the fore with a collection of stultifying and illuminating songs on Oh, Yes!!. Rusch manages to build things up even as he tears them down, taking things apart and song and subtly rearranging them in your understanding. Humor, intelligence and deviously good song craft inform the process in one of most original albums I've had the honor to listen to lately. Make sure Oh, Yes!! is on your to-do list.

You can learn more about Ben Rusch at http://www.benrusch.com/ or www.myspace.com/musicwithininstruments. You can purchase Oh, Yes!! as a digital download from Amazon.com.
Posted by Wildy at 5:20 AM