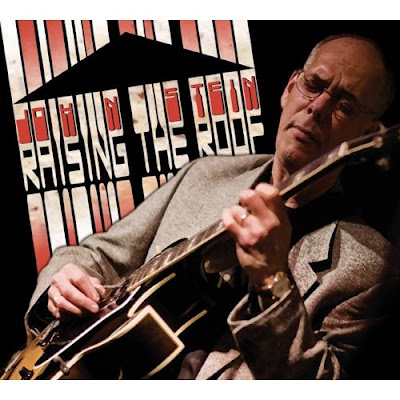 John Stein might not be a name you're familiar with if you're not a Jazz aficionado, but he's one of the premiere Jazz guitarists in the United States. The Kansas City, Missouri native is currently a professor at Berklee School Of Music in Boston, and has played with the likes of David "Fathead" Newman, Lou Donaldson, Larry Goldins, Idris Muhammad and Dr. Lonnie Smith. Stein's latest album, Raising The Roof, is his most vibrant to date; a thrilling step forward from 2008's Encounterpoint. Stein is joined by the same band as on Encounterpoint: Koichi Sato (keys); John Lockwood (bass) and Ze Eduardo Nazario (drums).

Stein opens and really lets loose with Horace Silver's Nica's Dream. The energy is high and Stein's guitar work is flawless. Koichi Sato also puts on something of a master class in jazz piano here, displaying an almost intuitive feel for the piano and an ability to make things happen musically without hogging the spotlight. Ze Eduardo Nazario gets into some highly complicated and subtle poly-rhythmic work on Bobby Timmins' Moanin'. There's a mix of martial and Latin rhythms going on here that's absolutely intriguing, but Stein and his band don't let you rest for one minute until they're ready for you to give your full attention. Just when you're about ready to really focus on the latest voice/part to chime in, the central instrument shifts. Stein and his band go mellow for Stein's own A Child Is Born, following the song in swirling patterns like the eddies in small stream. Stein shows how far he can take subtlety and quiet while still making his points musically.

Stein gets one more original side in with Elvin!, a tribute to Elvin Jones. Stein might be the one whose name is on the CD spine, but Sato steals the show with his work on Elvin! Antonio Carlos Jobim's Vivo Sonhando is the highlight of the album, from the gently cascading piano work of Koichi Sato to Stein's vibrant guitar, the song practically breathes with its own vibrant life. Beautiful Love is sweet, lyric jazz with Stein offering up his most expressive work on the album, and leads into Wild Woods; a dinner music morsel that pesters you to pay attention. Stein closes out with Falling In Love With Love, giving the Rodgers And Hart song a reading that is a bit on the busy side but nevertheless tastefully done.

Stein continues to grow as an artist, refusing to rest on his well-deserved laurels. Raising The Roof must have also been the philosophy of the recording sessions that led to the album. Consider it risen.

You can learn more about John Stein at http://www.johnstein.com/. You can purchase Raising The Roof as either a CD or Download from Amazon.com.
Posted by Wildy at 5:59 AM