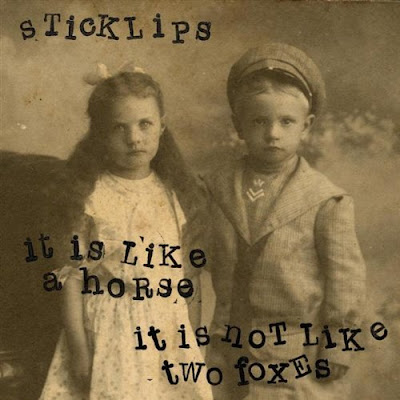 Bard College (Annandale-on-Hudson, NY) is the birthplace of Electro-folk trio Sticklips, one of the more interesting and unusual hybrid bands to cross my desk thus far. Based on the sweet melodies and cogent lyrics of songwriter/crooner Johanna Warren, Sticklips creates an inventive blend of electro and acoustic sounds that has been likened to a bunny with cyborg implants. The electric side of the equation comes from guitarist Jonathan Nocera and drummer/producer Jim Bertini, who run like children at play through the gently picked melodies that Warren pens on Sticklips' debut album, It Is Like A Horse. It Is Not Like Two Foxes.

Stickips opens with Bedding Wells, an incessant and droning folk tune with electronic ornamentation that lasts over five minutes on essentially two chord changes. Johanna Warren has a very pleasant voice, but Bedding Wells weighs on the listener before it's even halfway through. Know Your Blows finds the narrator trying to figure out her place in the world. The arrangement, though simplistic, is quite lovely, and the melody is catchy. Cattleships & Bruisers pads the hallways of unguarded consciousness for over six months, making little sense along the way. On We'll Have The Hags Flung Out, Sticklips gets a bit expeimental, playing with unusual rhythms, but the plodding nature of the song fits in with the album as whole.

This is the main problem with It Is Like A Horse. It Is Not Like Two Foxes: Sticklips' tendency to get stuck in musical ruts. Warren has a voice that's highly enjoyable, but the material is too flat and too much alike to hold a listener's attention for too long. Entropy rears its ugly head once in a while, where Sticklips overwrites a song with other sounds just for the sake of doing so. Composition and creativity are lost at the hands of something like innovation. It Is Like A Horse. It Is Not Like Two Foxes tries to mix things up at times, but gets bogged down in Warren's Hope Sandoval-type voice. Stickips recovers sufficiently but never really escapes from the incessant melancholy that pervades their debut album. It would be great to hear what Johanna Warren can do in a different setting

You can learn more about Sticklips at www.myspace.com/sticklips or http://www.sticklips-exists.blogspot.com/. You can download It Is Like A Horse. It Is Not Like Two Foxes from Amazon.com.
Posted by Wildy at 6:30 AM

This will not have effect in fact, that's exactly what I suppose.