Review: Tireless Sedans - Score One For The Underdog 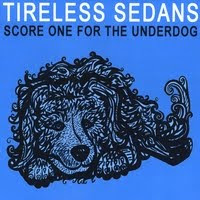 Tireless Sedans - Score One For The Underdog
2010, Superbob Records

On February 9, 2010, Moncton, New Brunswick’s The Tireless Sedans returned with their sophomore effort, Score On For The Underdog. The follow up to 2008's Parts & Labour EP is a dynamic step forward, maintaining the rootsy magic and distinctive musical style the Tireless Sedans have become known for while maturing both the sound and the outlook of the band. Moncton, New Brunswick's favorite sons might just bust out of their Province and go national in Canada with an album that's certain to be an early favorite in 2010.

Tireless Sedans come into Score One For The Underdog with a very different energy and approach than on Parts + Labour; a more melancholy and introspective feel exists here. The Lattice is a rumination on interconnectedness and it's strengths in a world where we are ever driven apart even as we are brought closer together by technology. Vocalist Dave Rahmer assumes the role of disaffected observer here. Sonically the song is interesting but the energy is a bit flat. Underdog follows a similar path; I don't mind the more introspective approach or the lower key approach musically, but the energy that Tireless Sedans exuded in the past seems to have taken a breather here. Half As Great finds the blood rushing back to Tireless Sedan's extremities in a song, ironically, about the impending death of a beloved pet.

Tireless Sedans mix things up a bit on Planning My Escape, a near-six minute guitar-driven opus that effectively mixes Prog and Pop in the process. Let You Down is a fine example of how to approach the more mellow sound Tireless Sedans seem to be playing with while maintaining the bright energy that has suffused their past work; it's one of the better overall songs on the album. Whose Leg was a split decision for me. I didn't get a lot out of the lyrics or melody, but I thought the instrumental work on the song was phenomenal, particularly the guitar. Things get interesting on Nightly News, alternating between an almost pensive plodding vibe and an aggressively classic rock feel in a guitar-led instrumental that's a real treat. Score One For The Underdog closes with Another Song No One Will Hear, a song that strips the act of making music down to what's truly important: the act of creation and release for the artist. The song seems to imply that the Tireless Sedans would be making music even if no one was listening.

You can learn more about the Tireless Sedans at www.myspace.com/tirelesssedans. You can purchase Score One For The Underdog as either a CD or Download via CDBaby.com.