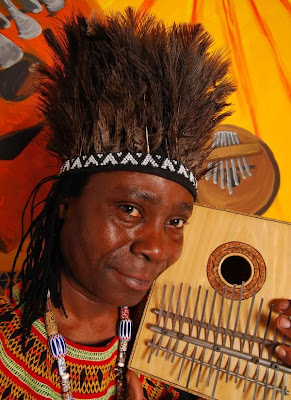 Njacko Backo’s humble beginnings trace all the way to a mountain town in Cameroon named Bazou (The Walkers), where he began learning to play percussion instruments at the age of three. Despite dire warnings from friends and family, Backo left home at seventeen to see the world, making his way to Paris by the time he was twenty-one and quickly assimilating himself amongst the African music community there. After a decade in Paris, Backo found his way across the Atlantic to Montreal, where he started his iconic band Kalimba Kalimba, spending nearly a decade there before moving on to Toronto in 1998. Backo and Kalimba Kalimba won Music Africa’s Fiati Memorial Award for Best Traditional Performance in 1999, and his/their reputation have continued to grow. Backo’s latest, a solo effort, is entitled Ou Est L’Amour.

Njacko Backo brings an eclectic mix of Jazz and Caribbean and African rhythms on Ou Est L'Amour, blending in the occasional dash of Reggae, Pop and even Mediterranean elements. Fans of Ladysmith Black Mambazo and Paul Simon's Graceland-era songs will be thrilled with Backo. He wastes no time, wading in quickly on Ben Skin Bazou with neo-Jazz guitar and vocal harmonies that dive and dart like a flock of sparrows in flight. It's an intriguing open. Suis Pas Seul plays like a song of celebration; joyous and full of life. Dinma is a powerful number, opening with a call-and-response vocal and maintaining elements of that style throughout. Dance is a mid-tempo dance tune that is instrumentally quite enjoyable. Unfortunately the voiceovers kill the song, turning what should be a positive listening experience into a maddening one.

Nogue (Pourquois) mixed African and Mediterranean sounds in a dark and moody melodic composition. The energy here is great, and the song is a sleeper that will grab you when you least expect it. Ou Est L'Amour is intricate and complex Jazz with African roots, housing one of the prettier melodies on the album. Non La Pollution has some delicious funk, but gets a little too trite with the environment message. Sung in French, it seems Backo went for French that would be universally understood rather than finding a poetic way to get his message across. This results in a lyrical "dumbng down" that wears poorly as a listener. Backo closes out quietly with La Voix Du Prophet and Afrique Reveille Toi, both of which are pleasant enough but inconsequential in terms of the album.

Ou Est L'Amour is a listening experience I would recommend to my readers. Njacko Backo crafts wondrous rhythmic musical landscapes to explore, carried along on melodies you won't soon forget. There are a few weak spots here and there, but on the pluses far outweigh the minuses.

You can learn more about Njacko Back at http://www.njackobacko.com/ or www.myspace.com/njackobacko. Ou Est L’Amour may be purchased as a download via iTunes. Hard copy CD versions of the album do exist, but I was unable to find any available for sale online.
Posted by Wildy at 6:00 AM