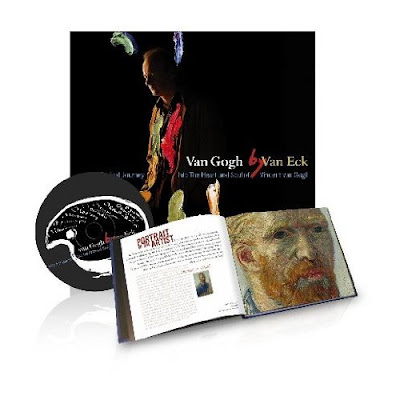 The term Dutch Master probably starts with Vincent Van Gogh, the painter who could be labeled the father of modern art in the western world. Van Gogh's life was well-documented by the artist himself in several hundred letter he sent to his younger brother Theo over his life. Those letters and Van Gogh's paintings inspired Dutch producer and recording artist Diederick Van Eck, who worked with producer Tom Harriman and lyricist Pamela Phillips Oland to create Van Gogh By Van Eck, a concept album based on Van Gogh's life in his own words. The album has already sold in excess of 50,000 copies in Holland recently became available in North America for the first time.

Each song on Van Gogh By Van Eck is based on a painting by the Van Gogh, amplifying or explaining details about the artist's life that he somehow displayed in that painting. Picture Of A Man (Self Portrait) is wonderfully layered 1980's Pop with soul inflections; it's highly introspective and full of angelic vocal harmonies. Still Life (Sien With Cigar Sitting On The Floor) is the sort of great Broadway soliloquy that highlights the first act of a show. Van Gogh is falling in love and justifying it to himself (or at least working it into his world paradigm). It's also major mix tape material ("What a revelation. No imagination came close to what love can be."). One Of The Family (The Potato Eaters) is based on Van Gogh's first major work. It's a well-written piece of 1970's Pop/Jazz/Funk, but seems at odds with the earthy flavor of the painting. It also sounds as if Van Eck is using some heavy vocal F/X on this tune. Van Eck goes for a stripped-down Jazz/Pop arrangement with Blues accoutrements for One Foot In Front Of The Other (A Pair Of Shoes). The song is well-written and performed, although I kept hearing other instruments asking to be brought into the mix (which might have been the point).

Show Me What's Over The Bridge (The Bridge In The Rain) could almost be the answer to the questions raised by One Foot In Front Of The Other. The song is about inspiration and the life of an artist from inside the artist's mind. The perspective is wonderful; intelligently and poetically written with a Blues-flavored Pop arrangement that fits it well. Red Boats, Green (Fishing Boats On The Beach At Les Saintes-Maries-De-La-Mer) is pretty little tune that borders on being a bit too complacent and dreamy. Van Eck and his compatriots capture the essence of the painting as they see it, but other interpretations might have incurred more buried tension.

Season Of Dreams (The Yellow House) is a straight-up Pop arrangement with piano work in the same jangly style as Ben Folds. It's a decent arrangement, but something about the energy comes off a bit flat; the title and the painting themselves both suggest more. Mother O Mother (La Berceuse) is another great musical soliloquy. The theatrical possibilities pour out of this song, which is performed as something of a lullaby. Lost Letter To Theo (Red Vineyard) is a wonderfully lush arrangement accomplished with synth (as piano, strings and voices), guitar and voice. This presentation was more than sufficient, but the piece cries for presentation with a full orchestra. Standing On The Edge (Wheatfield With Crows) was a solid ending, if a bit anti-climactic. Jangly guitar seems to help define the "edge" in the song, but seems a bit cheap as a device. It's not a bad effort, it just seems like Van Eck and crew perhaps took the easy way out rather than truly zeroing in on the emotional disturbance that led Van Gogh to his end and the ultimate release.

To put it in perspective, understand that Van Gogh By Van Eck might be seen as something of a concept album for a future musical. Indeed, plans to bring Van Gogh to Broadway exist, and there are a couple of breakout songs here that fit the mold perfectly. Much of the album is written in universal musical styles, an artistic choice certain to be debated heavily. The individual songs are very well written, but across the album (considered as a show), more dynamics will need to be introduced if Van Gogh is ever to make a serious run at the Great White Way. Nevertheless, Van Gogh By Van Eck is a seriously artistic attempt to document the artist's life in song. It succeeds on many levels; needing some tweaking for the stage perhaps, but a solid listen on its own.

You can learn more at http://www.vangoghbyvaneck.com/. You can purchase Van Gogh By Van Eck at Amazon.com or most major music retailers.
Posted by Wildy at 5:50 AM

I was struck by the music and the voice of the artist but the composition of the lyrics left something flat. It just made the songs sound cheezy and silly.