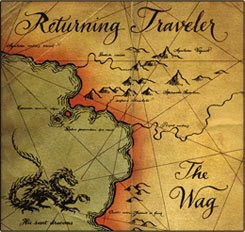 Returning Traveler opens with comfortable Country-flavored rocker Your Eyes. Alicia Van Sant takes lead vocals on a song that sounds commercial without trying to be. It's a great start to the album and a potential single, buoyed by a strong melody and a hook that's bigger than it at first seems. Don't Feel Sorry For Me finds Dan Corboy on lead and at the heart of some wonderfully layered harmony vocals. You'll fall in love with the melody of this one first, and the arrangement frames everything perfectly. Used To Say takes on a 1970's feel, mixing Rock with R&B and adding the bow of a big rock guitar solo. Setting Sun brings a heavy Americana influence with the usual WAG harmonies. Van Sant does a wonderful job on vocals in a song that's hopeful for the future.

The best overall performance on the disc is The Deal, a true WOW moment, with Corboy out front. The Deal is pure Funk and Rock N Roll; catchy like the flu. Barnyard Jamboree has a real "old-timey" feel, and Ostering is at his absolute best here with a top-notch performance. The WAG sounds like they're having fun with this one. Van Sant makes her last appearance as lead vocalist on To Be With You, an edgy love song that's certain Mix Tape material. The song itself is a bit out-of-the-box for a ballad, mixing in heavy Americana influences, and it's thoroughly enjoyable. I'll Never Leave You Again is a well-written and tuneful ballad that sounds as highly polished as anything The Wag has done. Returning Traveler closes out with In Other Words, an edgy, mildly disturbing closing track that is perhaps the lone moment of dissonance in an otherwise happy, well-adjusted listening experience.

I'd have to guess that good things have been going on in the lives of The Wag (both individually and collectively). The music on Returning Traveler reflects, perhaps, a certain happiness or comfort (but not complacency) on the part of the band. Perhaps even more importantly, Returning Traveler serves to underscore how much The Wag has grown over the years. Having reviewed four of their albums now, it's gratifying to see that The Wag have traversed the arc from rough-cut Indie band to a poised and polished Rock band with Indie cred but the chops to play with the big boys and girls. Returning Traveler is an exceedingly enjoyable recording from a band that perhaps found their voice with Soundtrack To A Silent Movie, and is using it confidently and with conviction now.

You can learn more about The Wag at www.myspace.com/thewagband or http://www.thewagband.com/, where you can purchase a copy of Returning Traveler on CD.
Posted by Wildy at 5:56 AM

The Wag rocks! They are a fantastic band and the new CD is really amazing :)

Another strong album from a group of great musicians. Check out one of their live shows, The Wag are the real deal......