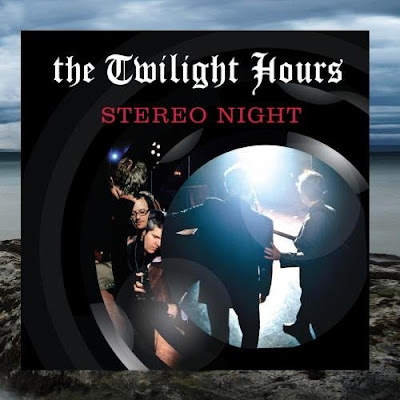 Minneapolis, Minnesota's Matt Wilson and John Munson continue their on-again, off-again musical relationship under the moniker The Twilight Hours, releasing Stereo Night, their debut album (as The Twilight Hours) on an unsuspecting world. Starting out together in the 1980's in Trip Shakespeare, Wilson and Munson have also teamed up in Semisonic and The Flops over the years. This time out it's lush harmonies, strong lyrics and amazing musicianship that reign supreme. Wilson and Munson have always had a talent for creating vibrant and original music, but they've raised the bar with Stereo Night.

Stereo Night opens with Dreams, a mildly catchy Pop confection full of angst and hope. John Munson's voice is an intriguing one, imbuing a solid pop song with a sense of urgency that can't be easily explained but is palpable in the performance. Dreams is offered up in a wonderfully smooth arrangement that goes down easy without giving up any vibrancy. Yes keeps that same sense, making you want to hum/sing along and dance just a little bit. A strong melody and melodic arrangement mix perfectly in a song you'll be hitting repeat on over and over. The Twilight Hours slow things down a bit for Alone, a highly tuneful and emotionally dense tune that may either appeal or annoy depending upon your disposition to the song. The song does drag a bit on tempo, but it so sonically pretty you might overlook it.

My Return sticks to the same melodic sensibility that's driven Stereo Night thus far, but wraps it in a package that makes My Return the most likely single on the album. My Return isn't the sort of tune that is likely to become a major chart star, but more likely to hang around the lower end of the Top-40 long enough to become a regular contributor at Adult Contemporary radio. Winter Queen Of Tomorrow carries a hip-hop beat and talk/sing style reminiscent of Sublime; the song is highly danceable but retains the mellow vibe The Twilight Hours have so carefully crafted throughout Stereo Night. Goodbye Good Life is the highlight of the album, with a melody that simply won't leave you alone. Vocalist John Munson tries the upper limits of his range with ease, creating a simultaneously Poppy and haunting feel that's as enjoyable as it is disturbing. Stereo Night winds down with Never Mine To Lose, sticking with the same mellow, melodic sensibility that's carried them thus far and adding some near-Beach Boys style harmonies in the process.

The Twilight Hours is a band you're either going to get or not. There won't be many middle-of-the-road listeners here. The melodic sensibility of the band and their ability to marry gorgeous melodies to full, rich arrangements will appeal to many. And in spite of the mellow feel of the music, The Twilight Hours does not lack for energy or passion on Stereo Night. This may not be the album that breaks The Twilight Hours into the big time, but they're definitely on to something. Stereo Night is a sonic treat worth savoring.

You can learn more about The Twilight Hours at http://www.thetwilighthours.com/ or www.myspace.com/twilighthours. You can purchase Stereo Night as either a CD or Download from Amazon.com.
Posted by Wildy at 7:36 AM

Music simply gets no better. The best musicians that ever lived. Get this CD immediately!