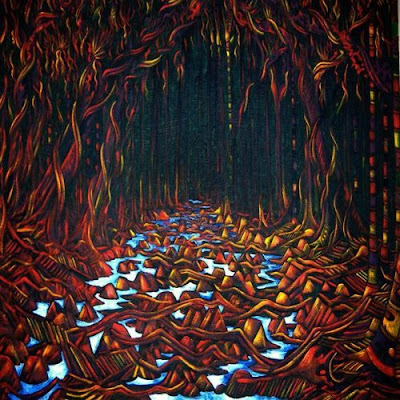 Lisa Germano’s tale is a love story about the whims of Rock N Roll. A highly talented violinist and songwriter, Germano was “stuck” in Nashville when she was discovered by John Mellencamp, who promptly asked her to join his band. The rest, as they say, is history. Germano has gone on to have a storied career with Mellencamp’s band, as an in-demand session/tour player (U2, Sheryl Crow, David Bowie, Iggy Pop, Indigo Girls) and as a solo artist. To say that Lisa Germano walks to the beat of her own drummer might be trite, but it's never been more true than on her latest album, Magic Neighbor.

Germano opens with the dream-like piano instrumental Marypan, Germano sets a tone that's both hushed and vibrant. To The Mighty One has the unstructured feel of emotions that have run amok. Germano juxtaposes an almost too deliberate vocal line with an arrangement that seems to flow like water. Simple finds Germano pushing at boundaries with a song that ranges from urgent angst to ethereal fantasy (write down to the calliope). Germano takes us on another instrumental sojourn with Kitty Train, a rather fetching short composition that features violins occasionally playing in a different key than the piano.

The Prince Of Plati is a pure escapist fantasy, written as if from the eyes of a child. The occasional missteps in the piano or distinct dissonance in the strings seem to suggest imperfection and a darkening on the edges of the fantasy that suggest the beginning of reality breaking through. The protagonist is never treated to the reality here, but you're left wondering how long that will hold. On A Million Times, Germano paints a recurring scene from a relationship never reaches equilibrium. There's an incessant nature to the tune that suggests both comfort and annoyance with the relationship as is. The arrangement, in spite of its inherent conflicts, is beautiful.

Magic Neighbor would seem to be about the intrigue of things we don't understand and the idea that intrigue itself can be both dangerous and beneficial. In this case danger appears to be the word in one of the more unusual story songs of the year thus far. Perhaps the most beautiful moments on the album come in the uncertain ballad, Snow, a halting ode bathed in orchestration and Germano's voice at its most elemental. The song gets repetitive, but the emotional urgency within is so compelling you'll forgive such small things. Germano closes with the incessantly cycling Cocoon. A lovely piece, Cocoon expresses a desire to change; to fly free from whatever binds Germano. It may be a sign of things to come.

Magic Neighbor is stark in presentation, with Germano flying with her heart on her sleeve. Magic Neighbor is fairly dark in tone, as if written from the perspective of someone who's gone through great pain, but with enough perspective to see hope for the future. Lisa Germano spins her yarns in intricate patterns with symbolism buried deep within her own psyche. Germano plays with sound and contrast to bring out great emotional viability in her music, but may be prone to overdue this effect at times. Nevertheless, Magic Neighbor is a real pleasure.

You can learn more about Lisa Germano at http://www.lisagermano.com/ or www.myspace.com/lisagermano. You can purchase Magic Neighbor as either a CD or Download from Amazon.com.
Posted by Wildy at 6:28 AM