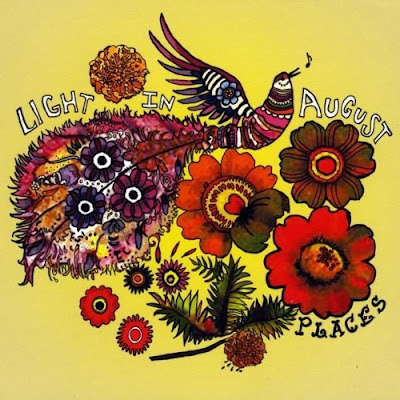 Ann Arbor, Michigan’s Light In August makes a point of walking off the beaten path. A traditional rock band with some very non-traditional instrumentation that occasionally includes Sitar, tampura, classical guitar and flute, Light In August aren’t the ones to be stuck in a box, musically. Light In August’s latest effort, Places, walks a musical line that will be comfortable and familiar to fans of classic rock, but retains enough new blood to not seem dated.

Places opens with Krishna Consciousness, a gentle pop tune awash in Indian instrumentation. The energy here is good, although the two-note, cant-like melody wears a bit thin by the end of the song. Out Of Reach is reticent and repetitive. Vocalist Alex Ward sounds uncertain, but Rachel Woolf provides the vocal muscle that drives this duet. Pacific Coast is jangly, Lo-Fi mellow pop that maintains the same bouncy-but-monochromatic sound. Northern Lights takes a decent turn, but is still a little too stuck in the sonic litany that Light In August has established thus far on Places. The energy in Northern Lights is palpable and the melody is pleasant, but Light In August seems to be stuck in a rut.

Cloudy Beginnings is a bland, directional instrumental that fails to wow the listener, although the drum work here is exceptional. Headline news falls into the familiar mellow, bland and repetitive mold and entrenches on the closing song, Ashes.

Light In August shows some potential, but seems a bit too hesitant on Places. The sonic spectrum of the album is just too consistent and too narrow to hold listeners for very long. The instrumentation throughout is solid, but the dynamics here just don't hold the listeners attention.

You can learn more about Light In August at http://www.lightinaugustmusic.com/ or www.myspace.com/lightinaugustmusic. You can purchase Places as either a CD or Download from Amazon.com.
Posted by Wildy at 5:55 AM