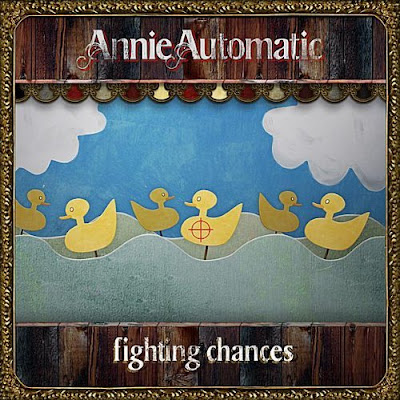 You might think that California rockers Annie Automatic have an air of mystery about them. Their lead singer (French) and guitarist (Cash) have eschewed patronymics, and the band’s logo offers up only an oddly scripted letter A in the crosshairs of a rifle’s scope. Despite the affectations, it would be hard to find a more elemental Rock N Roll band than Annie Automatic, who returns to basics on their second album, Fighting Chances. The result is flat-out great Rock N Roll.

Fighting Chances opens with Nepenthe, exacting an intriguing sound that balances on the precipice between Classic Rock, Modern Rock, Psychedelia and Punk. The song features basic Rock construction reminiscent of The Police's early work; a soaring chorus with clear honest vocals and a creative spark that's anathema to modern commercial radio. Suffice it to say Nepenthe is a great start! Something Sacred is a strong ballad with a highly likeable chorus. The emotion implied in the lyrics doesn't necessarily translate well into the arrangement. The result is something of a disconnect but still a very solid song.

A Song For Billy is a mournful tune featuring ethereal voices mixing with string instrumentation to build a creepy baroque feel at the end. An intriguing listen, the song takes a little while to get there and then resolves fairly quickly back into the melodic sense of the chorus. It's a haunted song that will stick with you, although it won't grab you right off the bat. Annie Automatic closes with Candy Apple Kisses, the potential hit of the EP. The melody here is absolutely infectious; the sort of song you hear on the radio and then search furiously to find out who did it.

You can learn more about Annie Automatic at http://www.annieautomatic.com/ or www.myspace.com/annieautomaticmusic. You can purchase Fighting Chances as either a CD or Download from CDBaby.com. The album may also be downloaded from Amazon.com or iTunes.
Posted by Wildy at 5:52 AM