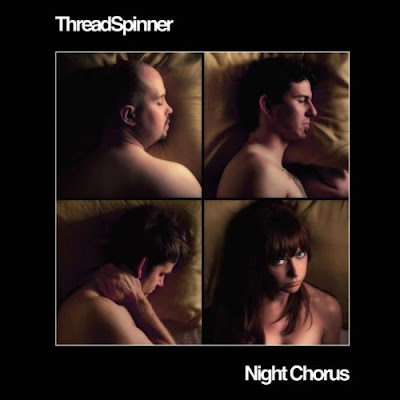 ThreadSpinner encompasses all sorts of Rock N Roll stories. Vocalist/keyboardist Sarah Zeibarth is the Midwestern girl who hopped a ride to the West Coast to chase her dreams. Her husband Jon (guitar) is the research scientist whose love for making music makes him never entirely comfortable in his white shirt, tie and lab coat. Warren Crone (bass) left the army to be a Rock N Roll road warrior and Jesse Cardin (drums) gave up his Canadian band to be a part of the SoCal music scene. Together, the quartet forms one of the more talented bands to come out of the Southern California scene in some time. This is why Night Chorus ends up being something of a disappointment.

Night Chorus is afflicted by its own continuity. ThreadSpinner writes simple, basic arrangements designed as a platform for Zeibarth, but somewhere along the line took over from their own muses, forcing their own will on their songs rather than allowing the song to come to fruition. Consequently, Night Chorus, an EP with real potential, becomes an over-produced, highly layered cell for both the musicians and for the voice of Zeibarth. Nothing highlights this more than Liar's Chair, which contrasts nicely with the first three tracks on the EP. The first three tracks are heavily layered, even the ballad Where The Game Begins. Emotional weight and a wall of sound are given precedence over melody, contrasts and unaffected feeling. Liar's Chair backs off a bit, allowing more room for the musicians to create, and more room for Sarah Zeibarth to let her voice go just a bit.

This is not to say that the rest of the album is bad, it's just not anywhere near what ThreadSpinner is capable of. The setup here is much too constricted, perhaps seeking out a commercially acceptable sound but choking out the band's more creative and dynamic elements in the process. ThreadSpinner has more than they show here. A start would be to strip things down a bit and give Sarah Zeibarth a little more room to let go with a voice that's rich and beautiful in tone and is just begging for an opportunity to soar. Just check out the last track, Running Away, to get a hint of what I mean.

You can learn more about ThreadSpinner at http://www.threadspinner.net/ or www.myspace.com/threadspinner. You can purchase a digital download of Night Chorus from Amazon.com or iTunes. CD copies exist, but I was unable to find any for sale on the net. If you need a hard copy, contact the band through their MySpace page.
Posted by Wildy at 5:49 AM

Thanks for the review of Night Chorus! Your opinion mirrors my own in many ways. I appreciate your honest appraisal and commend you on giving us our first not-100%-positive review yet! At least someone out there is paying attention :)

Drummer for ThreadSpinner
(Hawaii, not Canada)