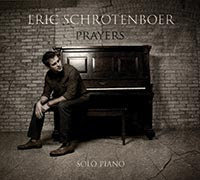 Eric Schrotenboer released his first solo piano album while still in high school. Over time he has turned his passion into a successful music production business, put out five albums, scored music for movies, television and ministries around the world, won multiple awards and served as a worship leader in his church. Schrotenboer's music has appeared in movies produced by Focus On The Family, AIG's The Creation Museum and WGN. This past year, Schrotenboer released his sixth album, Prayers, a series of instrumental piano ruminations on his beliefs and the world around him.

Prayers opens with Just As I Am, a plodding composition with an almost cinematic air; full of trepidation throughout until an almost too easy resolution in the closing bars. The incidental music feel and dizzyingly too easy ending are almost cliché. Have Thine Own Way is pretty, but sounds like it might have come from a Van Cliburn album. Considering the subject matter, the song sounds distinctly uninspired. Concert Of Prayer has a Windham Hill/Michael Hedges feel. Schrotenboer used the piano as both a melodic and percussive instrument here for the first time on the album, doling out a reserved but highly energetic sound. The melodic flow of the song still leans heavily toward the bland here, but it's clear Schrotenboer's finally trying to stretch the boundaries a bit.

Fairest Lord Jesus turns back in the other direction; a song of adoration that sounds more funereal than anything else and Schrotenboer reprises the plodding feel that accompanied the opening track to no good effect. My Jesus I Love Thee has some real potential. You could almost hear a CCM or Pop band taking off on this arrangement, as there's a Pop melody in here pushing at the seems to break free. Schrotenboer hits the heights on the penultimate Great God We Sing, finding a theme that sticks out on its own. Great God We Sing plays like a major score element, with a powerful melody and real direction/movement in the composition. Prayers closes out with Doxology, a variations piece that plays with the "Old 100th" melody commonly used in "The Doxology" sung in the Anglican Church. Schrotenboer rambles at times, and may also incorporate another theme I can't place, but it's a fair listen with some real creative flair.

Eric Schrotenboer makes some definite points on Prayers, but more often than not gets caught up in uninspiring moments. I enjoy good piano music, and I found this album to be generally innocuous, tending at times toward difficult to listen to. While I have no doubt that Schrotenboer is inspired in his writing, it doesn't translate well for the listener for much of the album. Schrotenboer's playing is technically proficient; just not inspired.

You can learn more about Eric Schrotenboer at http://www.ericschrotenboer.com/. You can purchase Prayers on CD from Bandfarm.com, or you can download the album from iTunes.
Posted by Wildy at 6:23 AM