Review: JD Eicher & The Goodnights - The Shape Of Things 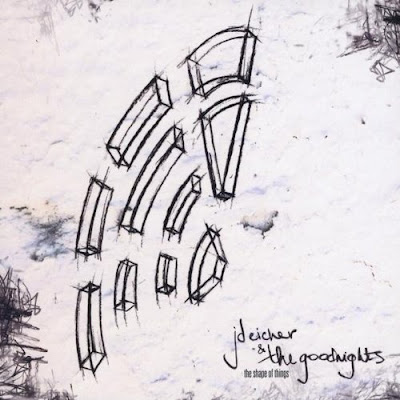 The Shape Of Things opens with the title track, subtitled Intro; a guitar and violin led romp that is bound to garner some Dave Matthews comparisons from those who aren't listening fully. The song is about perseverance and faith and not giving up on your dreams. Acoustic guitar and violin team to provide the vital rhythm of the song in contrast to Eicher's affectedly lyric vocal line. This Is Something could be the rebirth of an individual following a breakup. It's a hopeful song full of a blooming strength. There's anger and pain here but they fade even as the song progresses. Broken Wave brings delicious funk to a song where the narrator stands up for himself in a relationship that isn't balanced. It's a powerful song, evoking not so much anger as a new-found strength.

Not A Love Song is sweet and sentimental, driven by a gorgeous counter-melody from the violin. The song so thoroughly evades cliche that it nearly comes full circle in one of the more emotionally honest songs I've heard in the new year. Wanderer points out how the wisdom can sometimes overcome the hive mind in a touching tribute to individuality not in and of itself, but in pursuit of true freedom. Catching Stone is unusual; an apology for the over-reactions and hyper-sensitivities that sometimes arise in relationships. It's a powerful song with a tremendous chorus that will get stuck in your grill. Level Out is a personal favorite, utilizing a mildly percussive guitar as a plaintive counterpart to a soaring melody about hope. Eicher does a tremendous job of story-telling here in vignettes, and vocally it's the high point of the album as well. Wooden Shelves shows a similar propensity for story-telling and is nearly as good.

You Are is a delightfully upbeat song about doubt and wonder. Eicher is seeking answers and understanding from a world he's only begun to comprehend. The chorus is highly memorable; one that stays with you. Rain fits in with the general theme of finding your place and role in the world, using raindrops and their intentions as an initial parallel. The message, essentially, is that everyone has questions, but don't sit around wondering, get out and find out by doing and trying things. It's a vibrant bit of folk rock that's highly enjoyable. Calm represents a hopeful offer that is forsaken and leads to the closing track, Stopping Grounds. Stopping Grounds is all about making a stand for yourself; finding a place of strength to stand up to the world and say "no more". It is a song of quiet strength and really is a trip full circle from where Eicher started out, like a metaphorical trip of self discovery that winds up right where you started, but knowing that that, in fact, is the answer.

The Shape Of Things is one of the most gloriously subtle Pop albums of the past year, combining strong melodies full of beauty with story telling peppered with insight and a sort of awkward grace. JD Eicher And The Goodnights deserve every bit of attention they get for The Shape Of Things, and much more that won't come in a fractured and factionalized music business. The hints of awkwardness make this album distinctly human and wholly personal, like a late night phone call from an old friend full of the insecurities and vulnerabilities you only whisper to someone who knows your heart. JD Eicher treats all who will listen like his closest friend, and he connects. The Shape Of Things is unique and timeless; a Wildy's World Certified Desert Island Disc.