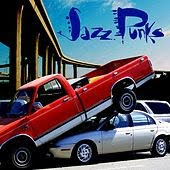 Los Angeles-based neo-Jazz outfit Jazz Punks sound a bit like a super group. Drummer Hugh Elliott has played such luminaries as Angela Bofill, Herbie Hancock, Grover Washington, Joan Osborne, Robert Lamm and Laura Branigan. Guitarist Sal Polcino is an alumnus of Tower Of Power Rhythm Section. Bass man Mike Polcino is a longtime symphony and jazz musician who has toured with members of Fishbone and also serves as a director on Fox' The Simpsons. Pianist Danny Kastner is an award-winning composer who owns his own media company and had the pleasure of being fired by Donald Trump on The Apprentice. Saxaphone player Robby Elfman is a session player in LA when not composing music for television and film. Together, this talented bunch travels and play under the name Jazz Punks, and have released a self-titled EP.

Jazz Punks opens with Led Gillespie, an occasionally muddy but generally workable mash up of Dizzy Gillespie and Led Zeppelin. The marriage is a rocky one but entertaining. Another Hue is highly inventive and melodic jazz, featuring some sweet guitar work from Sal Polcino. Polcino carries over his sweet sound into Heavy Footprints, with some wild piano work from Danny Kastner, but it’s the rhythm section that makes this one tick. Hugh Elliott (drums) is a rock, and Mike Polcino's plaintive, nearly haunting bass line is the soul of the song. The combination of The Beatles and Miles Davis is quite unique and works very well. Four finds Jazz Punks in full swing on the sort of classic fare that's filled supper clubs for generations. Jazz Punks close with I Can See Miles, a hybrid of Miles Davis and The Who that's intriguing. Running out over eight-and-a-half minutes, Jazz Punks dissect and bisect Davis and The Who in ways both coldly logical and serene.

Jazz Punks take listener expectations and turn them on their collective ears. Not out to kowtow to tradition, but rather intent on marrying sometimes disparate arts and artists, Jazz Punks take risks on a big scale. When they don't work out it's almost expected; when they do the songs seems like brilliant surprises. The creation here isn't so much about making something new, but helping you hear songs you might already know intimately in new and exciting ways. This is one mark of a seasoned musician/entertainer. Jazz Punks come highly recommended, particularly if you can see them live on stage. The Jazz Punks EP is a great introduction!

You can learn more about Jazz Punks at http://www.jazzpunks.com/. You can purchase Jazz Punks on CD from Amazon.com, or as a download through iTunes or Rhapsody.com.
Posted by Wildy at 6:42 AM