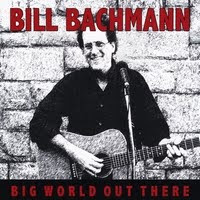 Bill Bachmann - Big World Out There
2009, Flight Of The BumBillB Records
Then along came Bill, just an ordinary guy... might be the perfect epitaph for Bill Bachmann when the time comes. The quiet, unassuming singer/songwriter originally from Buffalo, NY is an affable everyman until he straps on a six-string, when he becomes a magician. The ironic part is that guitar might be Bachmann's second talent, as there are few in the Folk world or out of it who can tell a story with quite the same zest, wit and intelligence without compromising the inherent musicality of a song. Bachmann's recordings have been preserved by the Smithsonian, and he has been covered by folks such as Christine Lavin, Shawn Colvin and Lucy Kaplansky. Bachmann graduated from opening for acts such as Dave Van Ronk and Steve Goodman to being an active member of New York City's Greenwich Village folk scene, playing with artists such as Paul Siebel, David Massengill and George Gerdes and His All-Male Vegetarian Orchestra. Bachmann's latest effort, Big World Out There, is a master class in marrying storytelling to song craft.

Bachmann opens Big World Out There with the title track, a devotional to his calling that could easily be heard as a simile metaphor for humanity. Bachman discusses music with grace, injecting a touch of humor "Some (notes) have volume as their forte" here and there. Bachmann shows off some serious slide-guitar work on Just Shoot Me I Hate My Life I Wish I'd Never Been Born Blues. Dark humor and serious Blues chops mix here to create a virtuosic performance. If puns make you laugh (or at least groan in mild discomfort), Closet Closet will be a fun adventure. On Upstate Towns, Bachmann offers up a view of small town/suburban life that isn't really complimentary on its surface, but serves more a descriptive than defamatory purpose. The arrangement is dark and vaguely disturbing, like a painting that's slightly out-of-focus. This Band Was Your Band takes Woody Guthrie's This Land Is Your Land and turns it into a Beatles tribute. There's a certain corniness here that will cause listeners to either immediately love or hate the song without a lot of middle ground. Bachmann fills the song with historical facts and viewpoints about the Beatles, sewn together with his trademark turns of phrase and puns.

Bachmann pays tribute to Major League Baseball's Cincinnati Reds on Reds That Cincinnati Came To see. The song is based on the melody from Blues My Naughty Sweetie Gave To Me and is quite entertaining, although it may fall a bit flat with folks who aren't baseball fans. Bachmann continues to impress with his guitar work. Vacation is something of an instant classic; a trip through the alphabet in song that has been preserved for the Smithsonian's Folk Archives. Vacation is inventive and fun, done in a talk-sing style complete with kazoo solo. A More Perfect Union was written on the night President Barack Obama was elected and is a tribute to that fact. The song is a paean to hopes and dreams realized and has a sweet melody

Fans of venues Towne Crier (Pawling, Massachusetts) or Caffe Lena (Saratoga Springs, New York) will have both a historical and musical interest in The Ballad Of Townes Van Crier and Pasqualina. Van Crier started was a patron of the arts, and Pasqualina Nagri, better known as Lena Spencer, ran Caffe Lena until her death in 1989. The song includes not-so-obscure references to the Kingston Trio and Don McLean, but is really something of an off-the-cuff tragedy told in humorous terms (ala Shakespeare).

Bachmann ratchets up the humor on Giant Can Of Paint, an entertaining Bluegrass romp that might be irresistible even if you're not much of a Bluegrass fan. It Won't Be Long takes on end of the world prophecies such as Armageddon and the Aztec end-of-world predictions for 2012. The song is written from the brink of the end of the world, referencing the Biblical prophecy of the drying up of the Euphrates river as a precursor to the final battle between God and Satan (Geopolitical concerns combined with drought have had the net effect of essentially drying up much of the Euphrates). The song is serious and slightly uncomfortable, abandoning Bachmann's sense of humor for a sobering moment. Bachmann is back to his usual high-jinx on This Song Is Called This Song Is Called, a Bluegrass barnburner that's a vicious tongue twister to boot. Bachmann winds down with One Great Date, a quirky love song that looks back over years together through the use of clever word play and probably an inside joke or two. It's a sweet love song that might be a bit too obscure (or specific if you're in the know) to be a Mix Tape pick, but certainly qualifies as one of the more romantic silly love songs I've heard in a while.

Bill Bachmann is a throwback, of sorts, mixing the storytelling and musicality of Woody and the mischievous nature of Arlo. There's a reason the Boston Phoenix once opined that Bachmann was "grossly under-recorded". Listen to Big World Out There and you'll understand the sentiment. Bachmann isn't a flashy performer, but he can hold a crowd in thrall with his down-home folksy wit and intelligence; not to mention a musical touch that's almost magical. Big World Out There got to us a bit late to be considered amongst our top albums of 2009, but don't be surprised if it inhabits a number of critic’s lists for last year.

You can learn more about Bill Bachmann at http://www.billbachmannmusic.com/. You can purchase Big World Out There as either a CD or Download from CDBaby.com.
Posted by Wildy at 5:10 AM