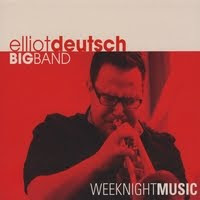 Elliot Deutsch knows the truth, that Jazz was Rock N Roll before Rock was born. The twenty-six year old performer, composer and bandleader has been knocking them for a loop on the Los Angeles Jazz scene since 2007, and released the debut album from the Elliot Deutsch Big Band, Weeknight Music, last year. Hard driving swing is the order of the day, mixed with rambunctious play and musical risk taking that harkens back to a time when Jazz was the high-wire act of American music and here adherents were the stars. Deutsch's background is rock solid, having played with or under the likes of Lalo Schifrin, BB King, Jason Mraz, Kenny Burrell, Les McCann, Hubert Laws, Bobby Rodriquez and Pato Banton.


Weeknight Music opens with a lively take on Cheek To Cheek before barreling into The Jury's Out with gleeful abandon. The spark of mischief that runs through the songs presented on Weeknight Music speaks to how much fun and creative energy went into the project. Beautiful Friendship takes listeners back to an era when big bands ruled the world, throwing in a decent vocal line over a lush orchestral jazz score. Aside from top-of-the-line musicianship, Deutsch takes risks in the writing/arranging of songs that are far beyond that most staid jazz musicians would ever dare. Even when these risks don't quite pay off the experience is still very worthwhile for the listener. Rhythm Challenge finds Deutsch having a race with himself; speeding things up right to the edge of losing control. A little of that control actually slips away on Space Cowboys, which plays a bit like Duke Ellington on speed.

Deutsch goes to the other extreme on Coffee Time, a pensive, halting tune that's more about setting the stage with atmosphere. The song is a nice change of pace, but is a bit listless at times. Yeah, We're Sleeping Together features some of the best solo work on the album, as Elliot Deutsche mixes brash confidence with musical subtlety beyond his twenty-six years that speak volumes into every note and every phrase. The finest work on the album, however, is the ensemble work on Nearness Of You, with subtly charged phrasing and a master's touch. Right behind it (figuratively and literally) is Nearness Of You. The same sort of energy is at play here, although perhaps to a slightly lesser extent. Weeknight Music closes out with the sprightly Stroll At The Beach, exuding the same playful energy that has made much of the album live and breathe.

Take a look around the Jazz world in twenty years and it won't be a big surprise to see each of the 17 members of Elliot Deutsch Jazz Band active in one project or another. I wouldn't go quite so far as to say Deutsch is the future of Jazz, but he brings the same sort of fresh perspective and exuberance that Harry Connick Jr. displays in the late 1980's. Weeknight Music is brilliant, balancing a healthy look forward with clear reminiscence on wear Jazz came from; all from a young man who sports what may be one of the brightest young talents in Jazz.

You can learn more about the Elliot Deutsch Big Band at http://www.edbigband.com/ or www.myspace.com/edbigband. You can purchase Weeknight Music as either a CD or Download from CDBaby.com.
Posted by Wildy at 5:05 AM