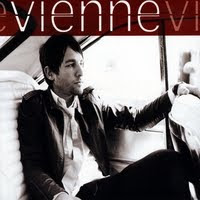 Vienne is the musical alter-ego of southern California’s Jonathan Korszyk, a singer-songwriter who caught the bug at a young age. Vienne’s big break came in 2008, landing songs on the NBC show Chuck. 2009 brought the recording and release of Vienne’s self-titled EP.

Vienne opens with Tales, a bit of angular synth/piano Pop that sounds like you should be hearing it on a 1980's radio station. Vienne's voice soars here, creating a tandem sound with the instrumentation that sounds like he was born to sing Tales. Weight Of The World is a down-tempo bit of Pop melancholia that sounds pretty. Lie Awake raises the energy a bit and takes on a slightly darker tone. From a Pop perspective it’s a highly marketable tune and likely to be picked up for TV. Be Alright is structured in such a way that it plays like a run-on sentence and therefore gains an air of monotony. The slow pace of the ballad combined with a low-energy vocal performance cements this aural image. This low-energy feel continues on She Breaks, a difficult listen that threatens to collapse on itself in a fit of melancholy. Vienne picks up the pace (but not necessarily the energy) on First To Know. The song is decent, but it's hard to get into because Vienne seems to be going through the motions rather than singing like he's invested in the song. Vienne closes with Baby Blue Skies, a mellow acoustic ballad. There's definitely a different feel here, with Vienne more keyed into the song, but the energy is still on the flat side.

Vienne writes decent enough material, but doesn't seem to have significant investment in performing his own songs here. Even when the energy rises up a bit it never gets anywhere above lukewarm intensity. While I'm certainly open to subliminal and mellow Pop, Vienne doesn't peg the meter even high enough to register in those categories. There's a decent melodic sense running through Vienne's music, but no real life to make it interesting.

You can learn more about Vienne at www.myspace.com/vienne. Vienne is available on CD through CDBaby.com.
Posted by Wildy at 4:55 AM