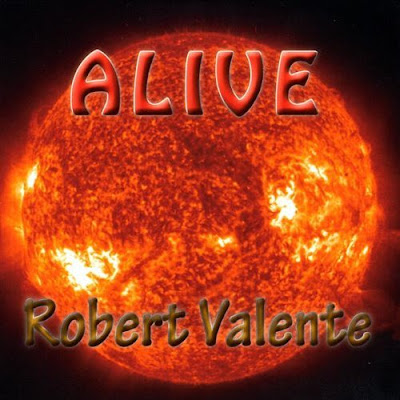 Robert Valente chooses not to dwell on biography, letting his music speak for him. We'll follow his lead. Valente's latest, Alive opens with Gospel Man, a rocking Country tune that's irresistibly catchy. Gospel Man is fast-paced and full of sound, hiding, for one song, the anomalies in Valente's voice. They come fully into the light on True Again, where Valente sounds like Neil Young singing at pianissimo. You Don't Know gets more of an Early Rock feel (think Bill Haley), while bringing out more of the thinly veiled evangelical content of the songs on Alive. Valente co-opts elements of Dylan's Blowin' In The Wind on The Answer, walking a fine line between being derivative and outright borrowing. Love Has A Way is a nice rebound; a decent song with a pleasant melody. It does tend to be a bit too repetitive both in lyrics and arrangement, but at base is a pleasant listen.

Country Singer is a pure example of what is called "testifying". Valente acquaints listeners with his life before he was a Christian, how he became a Christian and how it has changed his life since that time. The song is presented in an old blend of Country and Easy Listening. The arrangement is bland and innocuous but will have emotional impact for those who enjoy this sort of testimonial. The title track, Alive, struggles to be celebratory but sounds a bit disjointed in the process. This Old World plods on over four minutes that seems interminable. Valente stumbles through In Your Mind and Candy on the way to the closing number, Take My Heart, a heartfelt if mildly clumsy love song (of sorts).

Valente starts slow on Alive, finding his groove as a songwriter in the middle but then fades at the end. The musicianship on Alive is solid throughout with a mixed bag of songwriting. The music is heartfelt enough, with Valente singing what he knows and believes rather than affecting a pose or style. When everything clicks, Valente is anachronistically charming. At worst, Alive is too innocuous to be abrasive, but can be difficult nonetheless. Valente likely falls into a gap between Popular Music and CCM that qualifies as a true niche. That means the demographic for this album is likely a small one, but they're likely to be highly devoted fans.

You can learn more about Robert Valente at http://www.robertvalente.com/, where you can purchase Alive on CD. Alive is also available as either a CD or digital download from Amazon.com.
Posted by Wildy at 5:00 AM