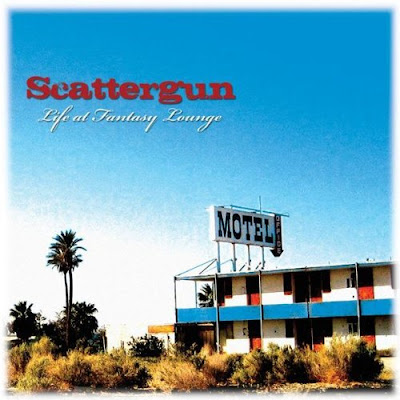 It really has all been done. History and art repeat because humanity has reached a nadir of expression, and everyone else that come along is destined to sound like somebody who came before. That's how a band from Chicago can come along, eschew any pretense of sounding like anyone else, write and play songs solely based on what they like and end up sounding so much like another band it's a little disturbing at times. The band in question is Scattergun, an original (and seemingly therefore thoroughly derivate) Americana/Rock band with its feet firmly on the ground and a sound that should fare them well. Fans of Blue Rodeo pay attention, because if you ever chance across Scattergun your first reaction will be to wonder what Blue Rodeo album that song was on. Upon closer listen, Scattergun and Blue Rodeo won't really sound that much alike, but stylistically they are soul mates. This is increasingly evident on Scattergun's debut album, Life At Fantasy Lounge, due January 29, 2010 on Mile Long Records.

Life At Fantasy Lounge begins, fittingly, with The Lie, a roiling Country/Rocker about falling in love with an idea that proves to be more desirable than reality. Vocalist Jeff Falk has an earthy, every-man sound that's comforting in songs about real life and real emotions, with Doug Jensen pacing the song nicely on bass. Duluth is full of the angst of breaking up with someone and moving on, draped in mournful guitar with Falk's plaintive vocals driving the action. Morning Star is an upbeat song about the necessity of ending a bad relationship that was done without edits. Morning Star tracks the impending end of a relationship that never ends, and how the conflict of affection can interfere with doing what we know needs be done.

On Pieces Of You, Scattergun offers up an aural painting of hitting bottom, where hopelessness trumps hope and light is scattered illusion. The song takes on a warped energy that's highly appealing with the dark subtext and passively angry guitar. Killing The Cure is an edgy rocker that allows Falk to stretch his vocal chords a bit. Killing The Cure is very catchy in its slightly repressed Americana arrangement and might serve as a viable single. Tom Waits Boots was inspired by the cover of the Rain Dogs album, and parallels the boots Waits wears on the cover to the singer's own emotional state in the shadow of a relationship that's been much less than perfect.

Battery Acid Debutante is buoyed by a strong arrangement but is essentially scraps of lyrics thrown together to form a not-cohesive non-narrative. Hotel Pillow revives a theme that seems to sit loosely on the shoulder of Scattergun on Life At Fantasy Lounge. It's all about doing something you think you like only to find out it isn't worth doing but having to follow through and tough it out. Matchstick Renoir is another "scraps" song and suffers from a similar lack of cohesion as found in Battery Acid Debutante. Runway 4-22 reflects another level of songwriting that Mike and Jeff seem able to reach for, stripping away any pretense at all for emotional honesty combined with a sympathetic poetry that borders on magical. Runway 4-22 describes the attraction of New York City and how it can feel like home right away, but also recognizes for many visitors a need to go home. Michael Paeth offers a perhaps unwitting justification to his son for this dichotomy, "as long as you know you're my finest hour, then it's alright". Scattergun closes with Dimestore Judas, an allegorical song about being alone that uses a Biblical reference for non-religious purposes. The song is utterly brilliant, highlighting an indifference that leads to greater loneliness in real world terms.

Scattergun really has something special brewing, although I personally find the inability to let even a scrap of interesting lyric go unused a bit frustrating at times. These "mash-ups" are generally the weakest songs on the album. That being said, the rest of the album is no less than brilliant. Scattergun, as a collective, can write and they play their hearts out. The comparison to Blue Rodeo (and to a lesser degree Wilco) is unavoidable, but Scattergun arrives at the sound honestly as their own. Life At Fantasy Lounge is an engaging debut album that's deserving of high praise. Make sure you check it out.

You can learn more about Scattergun at http://www.scattergunrocks.com/ or www.myspace.com/scattergunmusic. Life At Fantasy Lounge drops on January 29, 2010. You can order a copy on CD from the band through from Mile Long Records. Downloads are available through iTunes, Amazon and other retailers.
Posted by Wildy at 5:10 AM

Here, I do not really imagine it is likely to have effect.