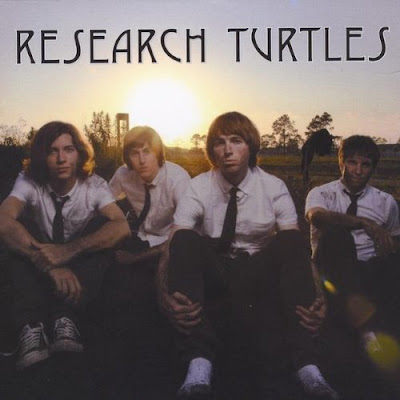 Research Turtles combines Southern Rock and British Polyphonia on their self-titled debut album, released in August of 2009. Brothers Jud (vox/bass) and Joe Norman (guitar/vox) decided to put together a van after Jud returned home from Louisiana State University. They grabbed the best local musicians they knew, Logan Fontenot (lead guitar) and Blake Thibodeaux (drums/percussion), and set out to realize their musical vision. All four members hail from Lake Charles, Louisiana, and graduated from high school within a few years of each other. Research Turtles have become favorites in New Orleans and have opened for Toad The Wet Sprocket. Research Turtles was produced by Justin Tocket (Marc Broussard, Sons Of William).

Research Turtles open with the crunchy guitars and smooth rock chorus of Let's Get Carried Away, a mildly catchy song with commercial potential (most likely in an Adult Alternative format, if they still exist as such). Damn is a verbally expansive love song that alternates descriptive, intelligent verses with a chorus mired in an emotional short-circuit of words. The song is an entertaining listen and sounds ripe for a teen comedy soundtrack with its Weezer-esque theme. Mission finds Research Turtles mining a Ramones-style post-punk anthem style with a pure pop chorus that seems a bit out of context but works all the same. Hints of The Refreshments can be heard in Cement Floor, one of the better songwriting efforts on the album. This song will get you moving even given its quasi-reserved tone.

As a former guitar dabbler myself, I know how irresistible a good riff can be. You just have to use it somewhere, even if it doesn't quite work in the context. So it is with The Riff Song, built around an iconic guitar riff that stands out on its own and outshines the song crafted around it. The ideas crafted around the riff in question just don't feel authentic for the band, like they were trying to write something to fit the riff rather than write something from the heart. Tomorrow is Research Turtles at their most accessible. The chorus alone will make this a likely concert favorite, and it displays the band's ability to write honest music with a real Pop feel. Into A Hole has a 1950's feel to it with its mild R&B underpinnings and sing-song chorus. Color this one another potential concert favorite. 925 is the most driven song on the album, built on another delicious guitar riff that this time has found a good home in a strong and interesting Rock N Roll song. Research Turtles close things out with Break My Fall, perhaps the best all around song on the disc. The sound here is a little light for Modern Rock Radio, but this song, beefed up a bit could be a major player on Modern Rock Radio (think early Pearl Jam as sung by Hanson in their early days).

Research Turtles is an intriguing album from a band that seems to still be honing their sound, but there's enough raw material here to keep them very much on the radar. There's a penchant for harder rock that clashes with a desire to play to the easy listening rock sounds of Adult Contemporary formats. Refining that mix will be more difficult than picking one direction and sticking with it, but Research Turtles don't present as a band interested in going the easy route. The songwriting is generally very solid and the musicianship is excellent. Vocalist Jud Norman isn't a stereo-typical front man as he doesn't have that big rock voice, but his vocals are passable, and once Research Turtles really gel in their sound this band could be a little bit dangerous.