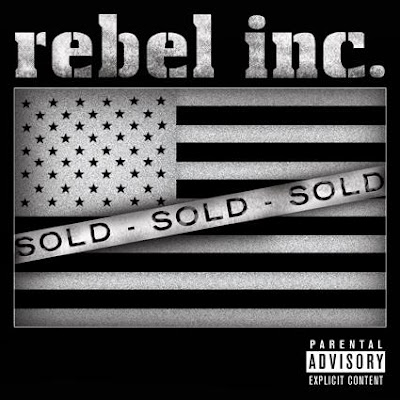 Rebel Inc. is a four-piece Punk rock outfit from Baltimore, Maryland who haven't forgotten the Rock in Rock N Roll. Their debut EP, Rebel Inc., features the crunchy feel of a Linkin Park with the musical economy of Black Flag.

Rebel Inc. opens with March, a simplistic and repetitive diatribe against mindless nationalism and military expansionism. Rebel Inc. paraphrases the tendency of governments to use fear of the outsider to rally the people and push them into policies that are otherwise objectionable. The repetitiveness her is representative of a sheep mentality, and the song is actually a fairly intelligent bit of social commentary. Let It Go follows in the same vein, lamenting the loss individualism in a culture that's increasing homogenized. Let It Go is a serious rocker with potential for Modern Rock and Punk outlets. Everything That You Hate is a classic bit of Punk rebellion with a slightly darker, almost revolutionary tone. It's a call out, of sorts, to the establishment as seen by the songwriter, whether that's governments, social structures or individuals.

Rebel Inc. rages against the machine some more on Shake 'Em Up; a decent tune that gets caught up in a few too many repetitions. 909 Revolution is built around a wonderfully dark guitar riff. The song itself doesn't work as well as those that came before, losing some of the coherence that Rebel Inc. is capable of. Rebel Inc. closes out with Broken Man, a song about the sort of desperation that leads people to revolt at some times and to simply give up at others. Rebel Inc. captures the feel of protest music in Punk, sometimes with great precision and sometimes in clumsy terms. Rebel Inc. displays a band that knows how to rock, and songs such as March and Let It Go reveal a subtlety you might not expect from a Punk outfit, but other material here is of the more mundane variety. Rebel Inc. is certainly worth checking out, and is a decent start. If Rebel Inc. can be more consistent in combining their intellectual and head-banging pursuits they'll write their own ticket.

You can learn more about Rebel Inc. at www.myspace.com/rebelincmusic or http://www.rebelincmusic.com/. You can purchase Rebel Inc. from CDBaby.com.
Posted by Wildy at 4:55 AM