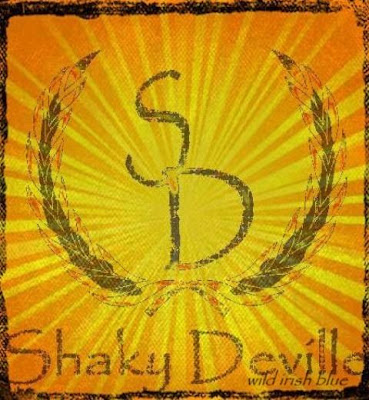 Nashville's Shaky DeVille has been rocking the Indie scene in that city since 2006 with their brand of reckless post-Punk Rock. Shaky DeVille has branched out over time, playing regular gigs up and down the East Coast and even branching out into the Midwest, but with the release of the band's self-titled debut album, Shaky DeVille looks to reach a much broader audience.

Shaky DeVille opens with M.V.T., a song about growing up in a family where everyone speaks their mind freely. What might be taken for anger is, in fact, honesty and respect in communication. When sparks fly its not out of anger but out of love. M.V.T. is a high energy offering and a great opener. Let's Roll gets to the roots of Shaky DeVille's punk roots in a raucous rocker about life in a military family. On Prayers, Shaky DeVille sticks to more of a 1960's Rock shtick. This wasn't my favorite offering on the album, but it is an interesting listen with some smoking guitar work. The supernatural comes out in Tattoo Man, a song about lead vocalist M.S.B. (Matt) DeVille seeing the ghost of his father after the latter's death. Message trumps delivery here. Perhaps the most accessible tune on the disc is You Had It Good, a vivacious rocker that's a companion piece to Let's Roll. Shaky Deville wraps up with the high-octane rocker Red Sultan. The guitar work here is downright amazing, buttressing the core of accordion and bass. Open the mosh pits for this one!

Shaky DeVille is a real treat for the ears. It's not the technically most profound recording you'll listen to, but for pure fun you'll have a hard time beating it. Shaky DeVille (the band) figures to give a stunning live show if this album is any indication. This is a band to go and see if the chance avails itself to you. Short of that, Shaky DeVille is definitely worth checking out.

You can learn more about Shaky DeVille at www.myspace.com/shakydeville. Shaky DeVille is available on iTunes. Keep checking their website for other availability.
Posted by Wildy at 5:00 AM

We played w./ these guys @ 3rd St. Dive in Louisville. One of the best times (and shows) we've been a part of. The energy was F'n sick!
Mike Gusher