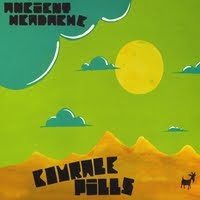 West Chester, Pennsylvania’s The Courage Pills garnered critical praise from us for their 2008 self-titled debut EP last year, and have been haunting clubs on the Philadelphia scene for a good three years now. Not ones to rest on their laurels, the band returned in late 2009 with their sophomore album, Ancient Headache. With a Post-Punk pastiche that has both singer-songwriter and Pop veins running through it, Ancient Headache finds the Courage Pills stepping forward into a brave new world and developing their sound.

Ancient Headache opens with Swan Song, a rough-around-the-scenes acoustic/electric alt-Rocker that is surprisingly catchy. Swan Song is a great opener. Memory is a bit off the beaten track but is built around a wonderful hook in the chorus. The song is catchy enough to stay with you and novel enough to real get in your brain and haunt you for days. The Courage Pills kick over a healthy dose of Post-Punk rock on Cemetary Song; another surprisingly catchy tune that might make you want to dance just a little bit. Open Our Eyes finds the Courage Pills hitting a bit of Pop/Rock gold. The chorus is infectious, the song danceable and the musicianship is top-notch.

Courage Pills get a bit darker and less accessible on Broke and Dumptruck. The energy level of the band remains high, but the distinctive Pop sense that runs through the first four songs on Ancient Headache takes a breather mid-album, returning on the wonderfully earthy Way Down. This is the sort of song where you just close your eyes and surrender yourself to the gentle swaying rhythm. The melody is brilliant even if the lyrics might be a bit disturbing for some at times. Ancient Headache closes out with the dark and moody Get Out And Play, a mildly catchy yet disaffected tune that seems like it would be a hoot done live. There's a lot of room for instrumental mischief in this tune, some of which is realized on the album, but the jam possibilities are endless on-stage.

Ancient Headache is intriguing; the Courage Pills takes risks and move forward from their 2008 self-titled EP. Most of the material on Ancient Headache ranges from interesting to compelling, and a real Pop sensibility wends its way through the album. There are a couple of rough spots, but it all works out in the end.

You can learn more about The Courage Pills at http://www.thecouragepills.com/ or www.myspace.com/thecouragepills. You can purchase Ancient Headache on CD from CDBaby.com, or you can download the album from iTunes.
Posted by Wildy at 5:27 AM