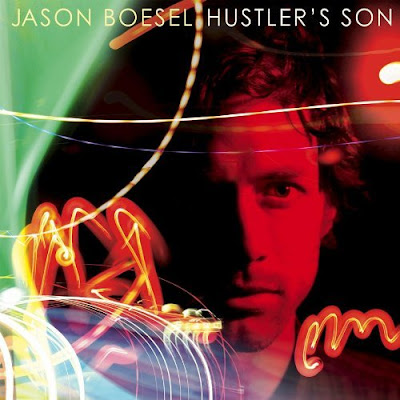 Jason Boesel is best known as a drummer who's worked with Bright Eyes, Rilo Kiley, The Elect and Conor Oberst, but he comes out from behind the kit for Hustler's Son, his solo debut. Out January 12, 2010 on Team Love Records, Hustler's Son explores Boesel's Americana leanings in ten original songs and one high-energy jam.

Hustler's Son opens with the dark musical matter of Black Waves before transitioning into the straight-forwardly charming Hand Of God. Boesel mines California Country, AM Rock and Americana for a refreshingly uncomplicated sound. that is sonically appealing. Burned Out And Busted has an easy feel that fits the whole California Country/Rock vibe. New World Mama manages to effectively combine a low-key delivery with vibrant energy. Boesel's voice isn't perfect, but he transcends himself on this tune. Hustler's Son is the first song Boesel wrote, and it's a gem. Boesel writes seemingly from the heart here, turning a gentle bit Country-Swing into a testimonial you'll have on repeat. Getting Healthy (Good Luck) sets a nearly disinterested vocal delivery against an energetic and rhythmic arrangement. The contrast between the two drives the song and makes for intriguing listening. I Got The Reason #1 is a jam Boesel plays with Conor Oberst and The Mystic Valley Band on tour. He documents the song here in low-key tones. Boesel closes out with Winking Eyes, a song that celebrates the passing of time in memorable moments. The delivery is once again low-key, perhaps a bit too much, but it's a sweet song that tries to soar a bit in the chorus.

Jason Boesel gives an intriguing effort on Hustler's Son. It's not the sort of album you listen to incessantly for weeks after buying it. Rather, it's one of those discs you'll appreciate again and again over time. Boesel is a solid songwriter and a decent vocalist, and his backing band includes folks who've played with Tom Petty, Gillian Welch, Old Crow Medicine Show and fellow members of Rilo Kiley and Mystic Valley Band. Hustler's Son is worth spending some time on.

You can learn more about Jason Boesel at www.myspace.com/jasonboesel or http://www.team-love.com/. You can purchase Hustler’s Son as either a CD or Download from Amazon.com.
Note: This review was previously removed by Blogger per a DMCA request (supposedly), but no information regarding the source or reason for the request was ever provided as required under law. If you have a concern with the content of this review, please contact me at wildysworld@gmail.com so that any concerns may be addressed. Short of specific feedback it is impossible to alter the review in an substantive way that ensures the complainant's perception of compliance. We here at Wildy's World are all about protecting the rights of the artists we cover, but we're also about protecting our right to offer honest thoughts and opinions about music offered in the public sphere, and will make every effort to publicize efforts to use DMCA for purposes other than what it was intended for.
Posted by Wildy at 5:05 AM