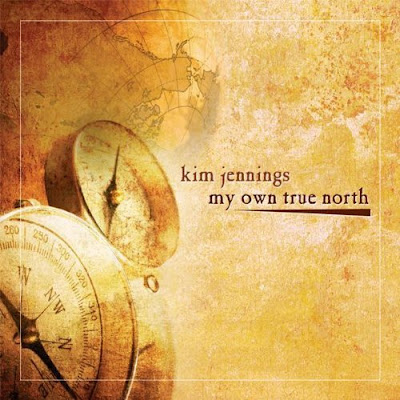 Kim Jennings - My Own True North
2009, Birch Beer Records
Kim Jennings is a Boston-based singer/songwriter who immersed herself in the Boston Folk scene a couple of years ago while writing material for her debut album. Jennings has not only been accepted but lauded, with comparisons to Antje Duvekot and Dar Williams. Jennings' debut album, My Own True North was released on December 1, 2009 on the label she started with singer/songwriter Dan Cloutier, Birch Beer Records.

Jennings opens with One More Time, a song about yearning for one last taste of happiness before it’s pulled away. In The Shadows is a lovely tune, piano driven and sounding like a classic singer/songwriter love song. Something odd is occurring with Jennings' voice here; I'd noticed it earlier but it's most readily apparent on In The Shadows. Some sort of computer-based affect sounds as if it’s been applied to the vocal line. Whether its pitch correction or simply a bad reverb effect I don't know, but it detracts from a sweet voice and a sweeter melody. Even on a straight-forward album such as My Own True North over-production can occur. This is a prime example. Often times it’s the imperfections in a voice that make it memorable; when a voice becomes memorable for sounding computerized that's not the best impression to make.

Come Home, a duet, should be a plea full of yearning but lacks real emotional weight. Neither singer sounds invested and the song falls somewhat flat. Leave With Me suffers a similar fate; it's a pretty tune but there's a two-dimensional feel to the song emotionally. Jennings definitely is feeling something, and the sweetness of her voice suggests vulnerability, but it feels false. Jennings is a passive participant in her own creations, which makes it hard as a listener to invest. The Music Box feels more authentic, and sounds like something J.S. Bach might have written. Jennings puts her heart into this one, and you can hear the difference. Jumper And Inside slide back into an almost apathetic feel, and those electronic sounding vocal twinges are again apparent on the latter.

Can Hardly Wait (To See You Again) is heartfelt and full of vulnerability; sung without artifice or false sentimentality. The best songwriting on the album can be found in a track called Hideaway; Jennings mixes subtlety and brave choices with deeply moving lyrics and her sweet, anachronistic voice. The result is a timeless tune that will very likely get picked up and covered by others. Save Me has a gorgeous melody, dressed in sweet vocal harmonies. It's a needful song full of a frail beauty that will make you stop and listen closely. Jennings takes the tiller and heads for home with True North, a Shawn Colvin style guitar ballad about finding your way home.

Kim Jennings reminds me of a young Jewel for her songwriting style and occasionally awkward but sweet tunes. My Own True North has definite highs and lows, but on balance is a solid album that will keep you coming back as a listener. Jennings tends to be a bit too tentative or complacent on the vocal lines at times, but the melodies are often pretty enough that you won't care (as much).

You can learn more about Kim Jennings at http://www.kimjenningsmusic.com/ or http://www.birchbeerrecords.com/, where you can purchase My Own True North as either a CD or Download.
Posted by Wildy at 5:00 AM