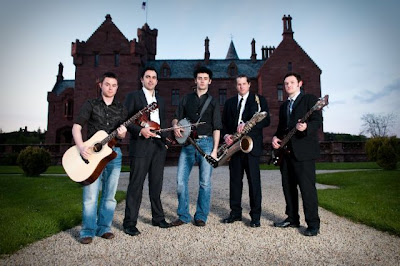 Dublin, Ireland’s Tupelo have taken to the Rhythm & Roots movement in much the way the fictional band The Commitments took to Motown in the film of the same name two decades ago. Playing some of the finest venues in Dublin and beyond, Tupelo brings their original compositions to life in a sound that would be called Americana on this side of the pond. Tupelo recently sent us a disc called Live In Studio. This appears to be a demo for an upcoming album, done primarily in one take without overdubbing. The mix is a bit rough at times, but the songwriting and play are high quality.

Tupelo opens with The Blue Gardinia, a feel-good drinking song. The style here is somewhere in the neighborhood where Folk and Country meet. Vocalist James Cramer has a pleasant, anachronistic sound. Firefly is gentle but catchy. You may find yourself wanting to dance along but not sure if you should. I did find it curious that one of the violins on this song appears to be just a bit out of tune. Man Like Me and San Francisco Bound are decent if a little bland. Tupelo comes to life on Figure It Out, imbuing the song with a bit of fiddle-tune energy. Leaving On Tuesday is a decent tune; a mellow song with real energy inside.

Tupelo comes fully alive on Little Rosalie, a moderately upbeat love song with a hint of Pop sensibility. Little Rosalie will get your toes tapping. Katrina is a highly personal look at the effects of Hurricane Katrina. The hurricane itself has become something of a cultural icon for songwriters, particularly in the Folk, Country and Blue genres. Katrina is a decent song, but there comes a point when a subject has been picked clean and every recapitulation highlights the same skeleton. Tupelo goes where they've wanted to go all along on My Daddio. The song is a joyous ode to Dads where the musicianship and energy are at the top of the meter, and My Daddio is the highlight of the album. Tupelo keeps the Celtic spirit up on My Family's Land, although this time it's a mournful tune about returning to our roots. Tupelo closes with the Bluegrass flavored I'm Going Home, a song about a wrongfully convicted man who is finally getting out of prison. The song is full of joy in spite of all that's gone wrong.

Tupelo follows an interesting path on Live In Studio. You get the live energy of the band in a somewhat reserved recording that may not do Tupelo complete justice. I am guessing that this recording was done in a series of single takes with minimal dubbing, which is fine, but the production and recording produces some uneven mixes at times and may have been managed a bit better. On the whole, however, Live In Studio is convincing. If Tupelo ever passes through town, I'm there.

You can learn more about Tupelo at http://www.tupelo.ie/ or www.myspace.com/tupelomusicireland.
Posted by Wildy at 5:05 AM