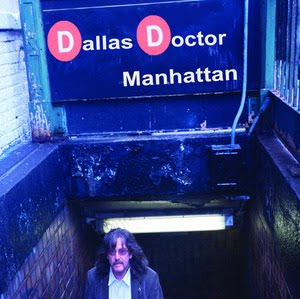 With the release of Manhattan on January 1, 2010, you might just be able to say that now Dallas Doctor has done pretty much everything. Doctor stated out in the music business as the lead singer of The Sounds Of Freedom, garnering an appearance on The Ed Sullivan Show before he was even out of his teens. What followed were gigs with The Family Waye (Dick Clark Concerts) and was a founding member and songwriter of Johnny & The Leisure Suits. Doctor went on to design and build studios across the South and Southwestern US, serving as a session musician or engineer for acts such as Three Dog Night, The Beach Boys and Hall & Oates. His talents as a writer can be heard in jingles on radio stations across the country, and he has also served as the VP of A&R for Centennial Records (nee Dangerous Records).

Manhattan opens with the mooning SongWriter, a hopeful song about someday being in the same company as someone like Paul McCartney. The song is a bit hokey but honest and heartfelt. Scandalous has a similar campy feel but features harmonies worthy of a Bee Gees tribute band. Manhattan is a tribute to all of the little things that make life in New York City what it is. Manhattan sounds like it might have come from an Off-Broadway cabaret show with pretentions to big-band Jazz. Where In The World is a great tune, with the narrator planning to travel the world to find the girl of his dreams. The song has a 70's Rock feel, complete with engaging harmonies and some serious guitar fills. Eat To Live addresses to irony of working to live and having no time or energy to live and enjoy life. The piano-driven rock ballad is brilliant in both message and its humorous accents. The talk/sing verse adds to a novelty sensibility, but there is real melody and composition here and it would be a mistake to write the song off as a novelty tune.

Little Lies addresses the use of imperfections of truth to make life easier both as individuals and social collectives, as well as how those same prevarications can be used to hold people back. The song is not a moral judgment, but rather an acknowledgment of their prevalence and seeming necessity at times. Now She Knows is a song about infidelity. I don't know that as a listener we're ever exactly clear on what "she knows", and the song is more of a relation of events than a story. In the end, Now She Knows rings a bit hollow, but sonically it's very enjoyable. The best song on Manhattan is I Like You, a "like" song, if you will. Pop music focuses on love as the be-all and end-all of ballads, but there's a lot of room for songs that cover the space in-between interest and love. The song is a bit campy, true, but it's brilliantly written, with the same sort of Pop sensibility you might find in one of McCartney's silly little love songs. Doctor says goodnight with Still The Same, a 1960's flavored rock song about the joys of youth and how they've yet to escape him. Sonically this song would seem to define the sunny sound that is Dallas Doctor's trademark, and the melody will be kicking around your brains anteroom for days.

Dallas Doctor and I got off on the wrong foot with Manhattan. I admit I was a little put off by the kitschy feel at first; perhaps I've become a bit cynical with all of the modern Rock and Pop I end up listening to, but Dallas Doctor's music recalls a simpler time when Rock N Roll was fun and life's problems didn't seem quite so complicated. Doctor won me over, and he'll win you over too. Even the most cynically petrified listeners will be thawed by Doctor's feel good Rock N Roll. The Beatles-esque melodies Doctor writes practically sing themselves, and the campy feel ends up adding to the fun. It's clear that Dallas Doctor had fun writing and playing these songs. You'll have as much fun listening.

You can learn more about Dallas Doctor at http://www.dallasdoctor.com/ or www.myspace.com/dallasdoctor. You can purchase Manhattan as either a CD or Download from CDBaby.com.
Posted by Wildy at 5:10 AM