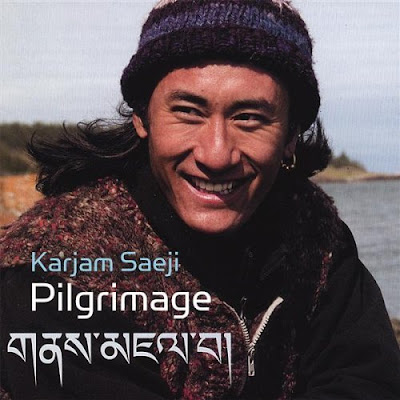 Karsangjamtso (Karjam) Saeji is a singer/songwriter and dancer originally from the grasslands near Maqu in China's Gansu Province. He has been actively performing since 1991, relocating to the United States in 2007. That year he recorded his first album as a solo performer, Pilgrimage, which won a 2009 Just Plain Folks award for Best Asian Album (he was also nominated for Best Asian Song). Saeji is known for his strong, clear voice and a tendency toward a Cappella singing. Saeji was also invited to play at the 2008 World Festival Of Sacred Music in Los Angeles. Saeji follows somewhat in the footsteps of Kelsang Metok, imbuing his songs with elements of Chinese Music and Western Pop.

Pilgrimage opens with Danlih, a catchy-but-gentle song that reminded me strongly of Iroquois Indian chants I heard at a Council Of The Nations event when I was young. Ga-Ik Lihji is a thing of beauty, fleshed out by an absolutely haunting flute part that will stick with you after the CD has stopped playing. Banchen Danlih has an arrangement that's heavily influenced by the West. Oddly enough this hybrid brings an almost Celtic flavor out in the music. This isn't surprising as Banchen Danlih is fairly typical of the strong Bardic style present in Tibetan popular music (which is also prevalent in the Celtic tradition). Saeji slips into gar style for Tserjih Tsomo, flying primarily a Capella throughout while performing vocal gymnastics that make Mariah Carey sound plain.

Saeji turns Westward again for Poem Of The Sixth Dalai Lama, opting for more of a free-form, bardic style of storytelling in song. The arrangement isn't overly complex and is exceedingly pleasant. Manglih returns to the glottal gar style, this time entirely a Cappella. I entered this experience with no hope of understanding what Saeji was singing, and yet Manglih was moving and powerful in its simplicity. The Tibetan Alphabet Song is helped along by a children's chorus exchanging lines with Kaeji, call and response style. It's a pleasant listen. Pilgrimage is sung in both Tibetan and English, a Cappella with bells, and is a powerful experience. As a western listener, Saeji takes a bit of getting used to, but his voice is strong and clear. Once you get used to some of the glottal turns and stops, there's a ruddy beauty to his voice you're likely to appreciate. Saeji closes out with Drashi, a rhythmic chant that once again brings to mind Native American chants.

Karjam Saeji is very much outside of my usual musical experiences, infusing Chinese and Western Popular music styles into Tibetan chants and story songs. The resulting album, Pilgrimage brings both a strident reserve and a sort of quiet grace that is rare. Make sure to check out Pilgrimage and Karjam Saeji. This might be a little bit out of your usual frame of reference, but Pilgrimage is definitely worth the detour.

You can learn more about Karjam Saeji at http://www.karjamsaeji.com/ or www.myspace.com/karjamsaeji. You can purchase Pilgrimage as either a CD or Download from CDBaby.com.
Posted by Wildy at 5:05 AM

I have this CD and find his work moving. Taking me to lands far yet close to my heart, I would recommend it for anyone interested in bridging the distance between the USA and Tibetan culture.