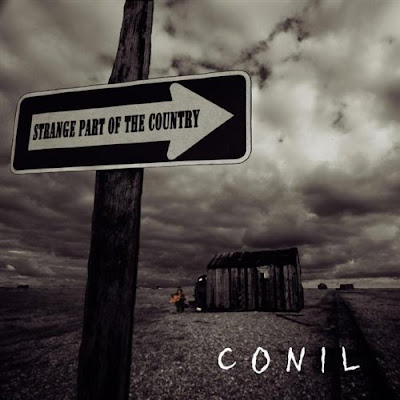 If you can't get a famous producer to listen to your demo, submit under a false name that sounds like somebody famous. Dishonest, yes, but it worked for London's Conil, who got Tchad Blake (Tom Waits, Pearl Jam) to listen to his demo by submitting it under the name Phil Coltrane. With the help of double bass player Danny Thompson (Tim Buckley, John Martyn), Conil has created a stirring album in Strange Part Of The Country, due out in February 2010. Already notes as one of the finest voices in England, Conil brings the presence of a lonely troubadour and a voice that is compelling in its singularity on Strange Part Of The Country.

Strange Part Of The Country opens with the title track, a rootsy bit of musical melancholy that pulls the listener in like a subtly insistent rip tide. Conil continues down the solitary track on Years Between, sounding like a cross between Bob Dylan and Hawksley Workman with a dash of Nick Cave thrown in. Conil creates an interesting dichotomy, blending his gentle melancholia with melodies that soar even when weighted with the world. Bonediggers has a serene air about it that evaporates in the middle but reasserts itself in the end. There is a distinct Zen feel to the song, with a possible moral of accepting yourself for whom and not what you are. Time Settles follows a similar formula and sounds a bit in a rut.

Conil climbs out of the crevice with Dog Meat Stew. Repetition still holds sway, particularly in the choruses, but on the whole Dog Meat Stew is an eclectic and interesting listen. Conil gets his edge on with Grapevine, the most vibrant and quietly angry rock song on the album. Things turn decidedly more serene thereafter, however. Distances From Here is somnolent and dreamy, and History Of The Best Of Us is a mildly morose paean to love or something like it. Conil rounds the bend and heads home with After The Hole; a six minute monstrosity that wears monotony and low affect like lucky charms. Conil does break out with some of his trademark soaring melody components, but much of the song is mired in a recursive reflection that's more desolate than anything else. It's interesting at first, but becomes difficult in its relentless pursuit of negative dynamics.

Strange Part Of The Country both engages and pushes away listeners at times, creating an internal tug of war that will be fun for some listeners and a turn off for others. The album itself is a bit uneven, and I am not sure that the folks who tagged Conil with the honor of having one of Britain's finest voices were listening to the same material I was; nevertheless, Conil is engaging with a sound that draws you in even if it isn't necessarily the prettiest one in sphere. His songwriting is a plus, although his plumbing of the emotional depths is a bit too weighty for my taste at times. Regardless, Conil is a talented performer who will connect with audiences on one level of another, as per their tastes. I don't imagine this is the last we'll hear from Conil.

You can learn more about Conil at http://www.conilmusic.com/ or www.myspace.com/conilmusic. You can purchase Strange Part Of The Country as either a CD or Download from Amazon.com. Downloads may also be obtained via iTunes.
Posted by Wildy at 5:05 AM