Review: Like Trains & Taxis - Songs From A Revolving Door 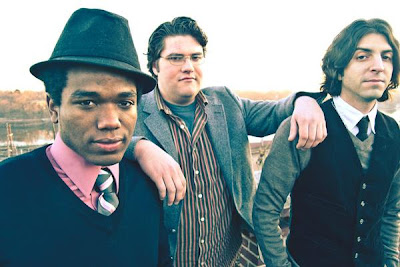 Like Trains & Taxis - Songs From A Revolving Door
2010, Devil May Care Entertainment

New Brunswick, New Jersey’s Like Trains & Taxis have an unusual sound that plays like a modern dinner cabaret act; blending Jazz, Pop, R&B and show tunes in a fashion plays like a familiar record even when you haven't heard it before. It's both the charm and curse of Like Trains & Taxis' debut album, Songs From A Revolving Door, due out in January of 2010.

Like Trains & Taxis opens with the nouveau cabaret and soul of Their Eyes Were Watching God. It's an intriguing opener that sounds like it might segue into an off-Broadway musical. Chris Harris forms the core, with sparse instrumentation wrapped around for good measure on one of the more sonically interesting songs I've heard of late. Bullet In The Brain maintains the same mojo with a quirky melody and a streaming lyric style. Separate Lives is a lively tune, sticking with the rapid-fire lyrical style of a Jason Mraz in a gentle but energetic soul/pop arrangement. My favorite track on the CD is Charlie; it sounds a bit like something Ben Folds might come up with and takes on a life of its own as a song.

Emily opens with an Elton John feel before taking on the Alt-Cabaret feel of a Fiona Apple tune. The tell of Songs From A Revolving Door is in the listening; the more you hear the more you realize how derivative Like Trains & Taxis truly are. This is modern cabaret music, flattering styles and artists with twice-removed imitation in arrangements created out of the musical poetry of Chris Harris. Owen Susman and Mike Del Priore do a masterful job of filling in the musical blanks around Harris' poetry, but in the end the styles are drawn out of the thin air of popular music, bending and shaping styles to fit to Harris' muse like modeling clay. Cold Shoulder and Mirrors show similar tendencies, and Day Wrecker the patient of but the most dedicated of listeners. The song runs seven-and-a-half minutes with little change in tempo, sound or architecture.

Songs From A Revolving Door plays, in the end, like an extremely rich sweet. It's new and interesting at first and goes down like candy, but it isn't long before you've had more than enough. Once the rich sheen wears off the flaws become all too apparent. While Susman and Del Priore create all the magic they can around the base melodies, Harris' songwriting is unimaginative. He fills up a lot of space with lyrical content, but often more can be said with less. Like Trains & Taxis have a certain charm to them, and with some work on economy of songwriting they might have something powerful to share. As it is Songs From A Revolving Door is destined to play a lot of one night stands with listeners. What sounds great at 2:00 AM won't pmarches to the drummer of a Coldplay salad with Maroon 5 dressing. Like Trains & Taxis says goodnight with Epilogue, a jazzy piano-driven ballad likely to outlast lay so well in the light of day.

You can learn more about Like Trains & Taxis at http://www.liketrainsandtaxis.com/ or www.myspace.com/liketrainsandtaxis. We don’t have a definitive release date for Songs From A Revolving Door, but it is expected to drop sometime in January, 2010. Expect availability through CDBaby.com.
Posted by Wildy at 5:00 AM