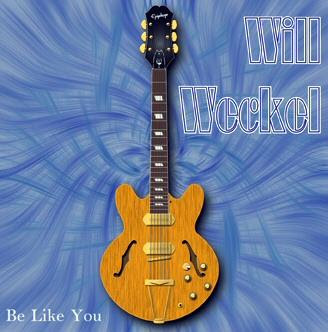 If you read through Will Weckel’s bio, you’ll understand quickly that he’s an artist with a lot of baggage, and he wears it on his sleeve. The San Diego-based singer/songwriter/surfer recounts an entire history of dashed expectations in word-bytes without ever actually telling you much about himself. We can divine that Weckel is a big Beatles fan, both from his songs and his statements. We know he’s originally from the Midwest and that he lost his mom at the age of five. Beyond that, facts are scarce. Weckel’s debut album, Be Like You, speaks to loneliness in documenting the end of a relationship. Weckel turns the corner towards living again at the end, but it makes you wonder at times along the way.

Weckel opens with More Than Anything, a straightforward Rock ballad with Oasis-does-the-Beatles charm. The arrangement and instrumentation are fairly simple, blending an Americana-Rock style that's derivative but borders on original. To My Heart comes off a bit whiny but has a solid melody and decent arrangement beneath it. Open Your Eyes is a tough listen, whereas Change is decent but a bit on the bland side. One Mans Dream is truly a decent tune. You'll note as you listen to Be Like You that Weckel finds moments where he channels Paul McCartney/Noel Gallagher vocally. One Mans Dream is one of those moments, and the energy in the song is subtle but believable.
Alyssa is heartfelt but fumbling in an awkward, lovelorn sort of fashion. Listeners will find this either charming or annoying based on their own predilections; I found it leaning slightly toward the latter but not awfully so. Weckel has another fine turn on You And I, a truly Beatles-esque tune with a garage feel and a catchy chorus. Some Other Guy is another shining moment; perhaps the best songwriting on the disc. There is a true Beatles vibe here that's irrepressible. I would suggest you might slip this tune into rotation on an oldies station and the song would fit in without a hitch. Be Like You closes out with the appropriately named It's Over Now, a melancholy tune that lets go of old grievances and tries to move on. The vocal harmonies here highlight the song perfectly. This is a great tune to sing; not overly catchy and not overly morose, but a real emotive moment with a strong melody that will hold listeners' attentions.

Be Like You is an interesting study, following a relationship essentially from beginning to end, including the painful letting go. It's hit or miss, with some very well written songs and some that just don't quite qualify for that designation. Weckel sounds like he might be coming somewhat into his own as a songwriter, crafting melodies and arrangements that are simple but lasting. There is a strong Beatles/Oasis influence here, from songwriting style to occasional flashes in Weckel's voice, but overall the album is highly enjoyable. Will Weckel is young and has some definite growing to do as a writer and performer, but he has a solid base to start from. It will be fun to see the process unfold.

You can learn more about Will Weckel at www.myspace.com/will4sale. Be Like You is available as either a CD or download from CDBaby.com.
Posted by Wildy at 5:10 AM

This is a great CD--I suggest you get it while you can; Interesting old-school melodies with a modern feel. Hopefully Mr. Weckel will continue to record-want more of his chord and life progressions.

From the songwriters perspective,
that is Will Weckel, me, Be Like you is a assortment of tunes written over several years.
Two of the tracks deal with my caustic divorce.."Alyssa" and "Its Over Now"
I will divulge thru prudence tersely written tidbits of what each of the musical expressions indeed are about.
Nothing to ponder.

More Than Anything
...originally a contexual post from God to me,be imaginative ok, even if you dont prefer the idea of a God, I softened it to not be religious so it also could be relational in varying degrees.
To My Heart
A song to my Sister...unadulterated.
Sis and I were bandmates along with her boyfriend..eventually we disbanded, truly was a heartache.
The song speaks for itself, not querulous as stated.
Open Your Eyes
What? Love songs are now distasteful?
Listen...L I S T E N,pop in a pure digestful form...heartfelt and honest.
Change
I am a creature that prefers things orderly...over the years I have learned that change is something to embrace, devolopes character.
When I was much more sophomoric, I dreaded change...it is just the essence of life
One Mans Dream
I still hold to me aspirations.
I have made few concessions to which direction I must travel as most are rationalisations encouraged by fear.
I am not as young as I once was but still possess the impetus and great phsical health to proceed.
Be Like You
One of my personal heroes,
John Lennon,a misinterpreted self expressive human.
Wonderful songwriter, humanitarian.
No I am not tring to be like John, yet I mirror the fascination of this musical genious.
Allured by the Beatles it is without a doubt why I play and write music to date.
In many ways music saved my life opening me heart to who I am.
Alyssa
An Open letter from a Father to his Daughter.
In the midst of accusations, Father pens a cautionary, tender note to his child.
Anything else is absurd!
You and I
Playful banter of one that views a choice bird and entertains notions
of another chance encounters.
Left Behind
Perhaps my favourite tune, overlooked by Wildy????
You have to listen to this Pop/Rock Ballad...remindes me of "Oh Darling"..in ways that you may or may not conclude with my assessment.
Some Other Guy
Ok, there a tune on a very early Beatle record, Decca Records to be exact, before signed to Capital.
Some Other Guy was the title of the tune, I liked the title and penned a song with the same name.
Its Over Now
There was a time I was on holiday visiting my brother.
I had not yet filed for divorce, still months away.
The Mrs. did not have phone brothers number, only web addy(address).
The post sent was disturbing to put it mildly, my brother fielded the message and in fact told me was adamant initally in sharing the text but realised it was in my best interest for me to read.
So I am watching a movie on telly entitled "One Shot At Glory"
About a footy player...the plot is not the reason for the tune as is the line that inspired it.
Mother was saying to Daughter I believe, dont quote me tho, and good luck on finding the movie.
But what was articulated is where the inspiration for the tune was birthed.
The wisdom sahred went as follows.
"You only betray yourself, if you cant let go of the things that cause you pain"
I wept.
Hours and hours passed and I wrote "Its over Now" from one concise line.
Wildy, in my estimation shows valour in tackling my record,
Be Like You,
appearing to prefer certain types of melodies and not others, so what!!!
I am indeed grateful and not at all offended.
You judge it to be so or not,
what was written by Wildy.
Of course you have to do homework.
Listen and review Be Like You yourself.
Thanks for taking the time Mr. Wildy.
Now it is your turn..whatdyathink mates, cmon, give it a burl...it means try it out...listen
I see stars now!
Cheers,
Will Weckel

I have a feeling that this would sound better, live. I've seen Will solo, and I don't think these studio guys had the feel, or the flavor. that being said, how about doing this album in a live, acoustic version, Will?