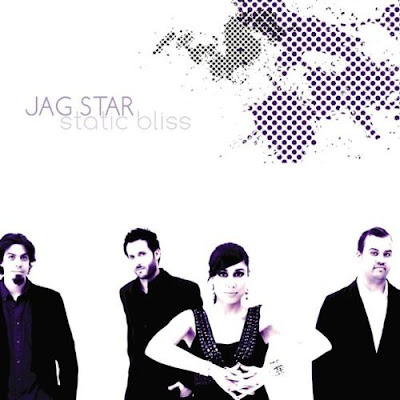 In today's music world, a decent Pop single is hard to come by. There are so many label-clone artists out there because commercial radio only plays fifteen songs at any one given time and they all sound more-or-less alike. A true single-worthy track is a big deal and can shake up playlists; having two tracks that are truly radio worthy is a rarer feat than it was twenty years ago. Artists who can capture three or more slices of pop perfection on one album are rare indeed. What a revelation it is, then, to discover Knoxville, Tennessee's Jag Star. I'm not follower of MTV "programming", and so had missed Jag Star's coronation on The Hills, Laguna Beach, The Real World and Newport Harbor. Not that Jag Star is a flash in the pan; with the release of Static Bliss, their fifth full length album over the past decade, Jag Star continues their tradition of capturing perfect sides of Pop music and offering them up in tight Pop/Rock arrangements wrapped around the gorgeous voice of singer/songwriter Sarah Lewis.

Sarah Lewis is an award winning songwriter several times over, winning the USA Songwriting Competition, iTunes Next Big Hit and London's WE ARE LISTENING songwriting award, while placing in the John Lennon Songwriting Competition and landing a Top 10 in Dick Clark's New Music Award. Not one to put all of her eggs in one basket, Lewis is also a cover girl; she's the Face of Wet N Wild Cosmetic in national print campaigns. But singing and writing songs seems to be Lewis' greatest gift, and the rest of Jag Star build winning Pop/Rock arrangements around her on Static Bliss under the steady hand of producer Travis Wyrick (P.O.D., Pillar, Disciple, 10 Years).

Jag Star opens with Talk To Me, a delicious Pop nugget that's intelligent enough to garner fans who think about music but catchy enough to have a serious half-life on the Pop charts. Lewis' voice has a light Pop feel, but there's enough Gwen Stefani-style tough girl in that voice to captivate listeners. Pressure is a bit derivative, perhaps paying (unwitting) homage to Billy Joel's song of the same name with a derivative keyboard riff. The song is incredibly catchy, particularly the bouncing chorus. Jag Star is 2-for-2 so far on songs with real Commercial Pop punch. Can't Make You Happy is a strong tune as well; the chorus doesn't really capture but then Jag Star pulls one of those choruses that thoroughly haunts your brain, making it an indispensable part of the album (although a long shot as a single).

Sofie is a song that could only be written from a mother to a daughter. There's not a mother out there who won't identify with this song. As always, Lewis creates a memorable melody and infuses it with real life. The arrangement is solid, and the musicianship is tight. Rewind is an interesting tune; my least favorite on the album, and yet it might be the song with the strong Pop radio potential. From a sonic perspective the song is striking and memorable. From a writing perspective it's not Lewis' best but it's solid. Shine is pure Pop/Stadium anthem. This is the sort of tune that an entire audience gets on its feet for and sings along to the chorus. It's a hard one to resist. Don't Go Away and Why Do I Miss You are decent enough, but both seem a bit less than the material they're surrounded with (or follow). Jag Star closes out with At The End, an Electro Pop offering that does them no justice.

Static Bliss is superb over the first seven tracks, offering up no less than four solid potential hits. The songwriting of Sarah Lewis is a factor, as is her voice; but the musicianship of the rest of the band is an integral in creating the musical web that surrounds Lewis. Jag Star is quite obviously here to stay. It would be easy to pronounce Jag Star the next big thing, but this album ends up feeling a bit rushed at the end (like perhaps the last three tracks were thrown on just to complete the album rather than waiting to write material that fits in with the album as a whole. Nevertheless, Static Bliss is not an album to pass by. If Pop/Rock is your mien; if you always wanted a band with the Pop power of The Go-Go's and the toughness of No Doubt, then listening to Static Bliss will feel like coming home.

You can learn more about Jagstar at http://www.jagstar.com/ or www.myspace.com/jagstar. Static Bliss is available on CD through CDBaby.com. Downloads can be acquired from Amazon.com and iTunes.
Posted by Wildy at 5:00 AM