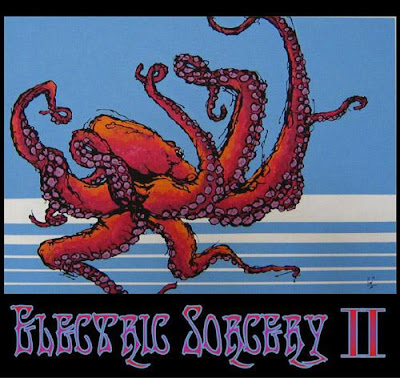 Electric Sorcery II opens with Three Eyes, a guitar-driven classic rocker with a Reggae undertow. The guitar work is impressive although I am sure some might argue it’s overdone. The existing vocal lines are understated and work hard to balance energy and quietude. Horpus Richter gives it all over for five-plus minutes of instrumental bliss driven by a sound vaguely reminiscent of early Rush. Electric Sorcery winds up the trip-index on Deeper, mixing in elements of Jazz & Soul to a mellow-pop/Dance arrangement. The Urge goes extended jam before turning into a funky, Red Hot Chili Peppers style tune. It's an entertaining listen, although borders on formulaic for the genre. The Urge gets tedious however, again featuring extensive guitar soloing in its eight-and-a-half minutes. Electric Sorcery takes a turn for 1970's AM rock on Little Warrior. The song borders on charming, but the vocal line contains significant pitch issues that detract from the song. Electric Sorcery traipses through Year Of The Eel and Apparition before closing out with Inkriminated, failing to break new ground along the way.

You can learn more about Electric Sorcery at www.myspace.com/electricsorcery. Electric Sorcery II will be released on January 9, 2010. Keep checking the band's MySpace page for availability.
Posted by Wildy at 6:26 AM