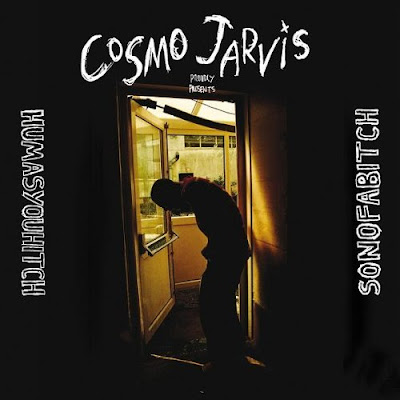 19 year old Briton Cosmo Jarvis is an unusual talent, accomplishing more in the music business than many years his senior. Last year we reviewed a sampler sent to us from his double album HumAsYouHitch/SonOfAB!tch. We must have said something nice, as recently the whole album showed up in our mailbox. The writing on HumAsYouHitch/SonOfAB!tch is young but written from the perspective of an old soul, displaying both the artful storytelling of a veteran singer/songwriter and the biting cynicism that is the hallmark of youth.

HumAsYouHitch is an album of discovery, written about the time in Jarvis' life when he was discovering girls and his place in the world. It opens with You Got Your Head, a song about how easy it is to get your priorities misaligned during this time of life. The chorus is incredibly infectious, as you'll find when trying to expunge it from your mind once the album is done playing. Mel's Song is a clumsily inappropriate teenage love song that may be closer to the truth for a fifteen year old boy than anyone wants to admit. She's Got You admonishes a friend for disappearing into a new relationship. The song is part jealousy and part friendly warning to a comrade blinded by love or lust. Jarvis unloads another highly catchy chorus on listeners in a delirious aural assault you'll want to be a part of.
Wild Humans talks about how society works to normalize all of us into expected roles and ways of being, and the negative effect this can have for those who don't fit in (represented as a tongue-in-cheek reference to cannibalism). The song is highly entertaining, sonically enmeshing and very original in presentation. Jarvis explores his own teenage covergirl fantasies in Jessica Alba's Number, counting out the celebrities with whom he'd love to spend some time. Things turn a bit more serious on Get Happy, a musical examination on the stressors that haunt adolescent life right into adulthood. The Caribbean-style chorus may offer a second intention to the lyrics therein, but even without such subtleties the song is a great listen. HumAsYouHitch bows with Crazy Screwed Up Lady, a high-speed, high-energy ode to someone who's just a little bit lost.

SonOfAB!tch is a bit more pensive, showing a slightly older perspective that's more focused on understanding than discovery. Jarvis opens with Clean My Room, a song about recognizing the difference between a relationship that is beneficial and one that is simply comfortable. Clean My Room is a wonderful metaphor that takes a disastrous (or at least highly illegal) turn part way through. Either way, its brilliant songwriting and highly entertaining. Mummy's Been Drinking is a call out to a mom who's absolving her own parental responsibilities in a bottle. It's not even so much an indictment as it as a call for the mother in question to get her stuff together and start living her life. The guitar work here is impressive as well.

Sunshine And Dandelions covers some of the darker aspects of human relations; the seeds of murderous intent sown among non-committal smiles. Luckily most such seeds never are nurtured to fruition, but the fact that the human mind considers such things even for a fraction of a second is telling of how fragile the barriers of civility can be. Problems Of Our Own takes divorce and the angst it infuses into parents relationships with their children and lays out a study in song. Jarvis chooses this moment to pull out another wonderful sing-along chorus; he seems to save the best hooks for the darkest songs. This song is, in part, autobiographical, which may help listeners understand a bit more about where Jarvis is coming from.

Sort Yourself Out is about the displacement that most feel as some point growing up when your perspective leaps ahead but your life stays the same. There's an inevitability to the human condition that's implied here, and a need for each of us to come to our own terms with our unwilling participation in humanity/society. The songwriting is wonderfully insightful and catchy. He Only Goes Out On Tuesdays is a nearly-seven minute long macabre spoken word tale set to music about a child enslaved by his father for less than parental acts. The incredibly dark story is told in pulp-fiction style spoken word streams and underlines the powerlessness of young victims of physical abuse in stark terms. The song is unsettling and provocative; successful as both social message and art. Lonely Stroll is presented live-in-studio, most likely done in one take and gives the listener an idea of what you might hear on stage. If this is it, people should be beating down the doors to get into Jarvis' shows, as he has this compelling charisma that will make you want to sit and listen as long he keeps singing. Jarvis closes out the album with about a minute of harmonic vocalizing that Brian Wilson would enjoy.

Cosmo Jarvis is going to be around for a long, long time. His talent as a songwriter and performer is nearly singular. I can't think of anyone in the popular arena quite like him, although if pressed I might say he's something of a guitar-playing Ben Folds. Jarvis' ability to craft stories and narratives in songs is extremely advanced for the tender age of nineteen, and over time he may find himself mentioned in the same circles as Randy Newman, Lyle Lovett, Ron Hawkins, Bruce Springsteen and others. For now, he's an incredibly dynamic performer with an unusually broad coalition of youth and wisdom on his side. HumAsYouHitch/SonOfAB!tch is brilliant, a Wildy's World Certified Desert Island Disc!

You can learn more about Cosmo Jarvis at www.myspace.com/cosmojarvis or http://www.cosmojarvis.com/. HumAsYouHitch/SonOfAB!tch is a UK only release at present. In North America, the cheapest outlet I found was CDUniverse.com.
Posted by Wildy at 6:25 AM