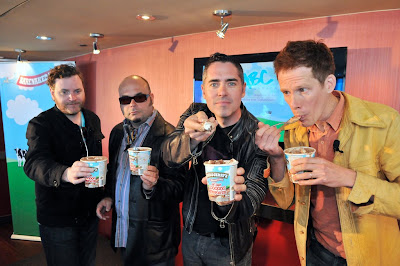 It's hard to believe it's been 12 years since Barenaked Ladies dominated both US and Canadian radio with One Week, much less that it's been 17 years since I first saw them in an over-crowded and likely illegally packed former truck garage in Buffalo, NY. I've heard Barenaked Ladies go from a jazzy acoustic-Pop sound to brooding new wave to Poppy dementia to mellowing Pop maestros who Paul McCartney himself calls one of the most interesting bands in Pop music today. Co-founder/vocalist/songwriter Steven Page departed the band last year, wanting a larger share/stage for his songwriting, leaving Barenaked Ladies as a quartet for the first time in nearly two decades. The band chose to continue in this fashion rather than trying to replace Page's iconic voice.

Barenaked Ladies will release their 11th studio album, All In Good Time, on March 23, 2010 in Canada with a US release due on March 30th. It will be the first new material as a quartet and has been a source of both agita and excitement for longtime fans. On January 8th, the Ladies released the first single, You Run Away, on their website. It would be hard to call You Run Away a departure for the band, as BNL have ever been moving toward a more developed and nuanced sound, but for years Ed Robertson and Steve Page were yang and yin, respectively, for the band. They served to balance one another, as Page's darker side brought out the lighter aspects of Robertson's musical character. Over the past few albums, Barenaked Ladies have become more and more egalitarian in their songwriting, changing the balance of songwriting duties and influences.
This change in structure started to bring out a fuller texture in the band in general, and Robertson's songwriting in particular. If You Run Away is any indication, the change that has been fomenting for the past decade comes into full bloom in 2010. You Run Away is a mid-tempo, sorrowful ballad. It could be a song about a failed relationship (and I am sure some fans will speculate about the lyrics and Page's departure), but it's not an angry song. The melody is among the finest Barenaked Ladies have crafted in their 20+ years together, and it might be just the tune needed to return Barenaked Ladies to the Pop charts.
Robertson is in amazing voice, and arrangement is serene and melancholy, full of an almost tragic beauty. If You Run Away is representative of the album, All In Good Time could be their finest album yet. On a purely subjective level, as a fan, You Run Away brings me back to a time and place when I used to listen to the band incessantly. Not because it sounds like they used to, but because it sounds like Barenaked Ladies are once again creating like they used to.
Rating: 5 Stars (Out of 5)
You can learn more about Barenaked Ladies at http://www.barenakedladies.com/. Barenaked Ladies will release All In Good Time (read review here) on their own label, Raisin Records, but recently signed a distribution agreement with EMI Music. The song will be released on iTunes in the near future. For now you can stream You Run Away on their website. You Run Away and All In Good Time were produced by Michael Philip Wojewoda, who previously produced the band's groundbreaking 1993 debut album, Gordon, and their 2008 Children's album Snacktime, as well as albums for Spirit Of The West, Great Big Sea, Ashley MacIsaac and The Rheostatics.
Posted by Wildy at 5:46 AM

I own everything BNL have ever released, so I'm looking forward to this album too.

Shame Steven Page had to leave - but never mind, it could mean we get a solo album from him soon too.

Worth checking out the first Steven Page "solo" album under the name of "Vanity project". Some really good stuff on it.