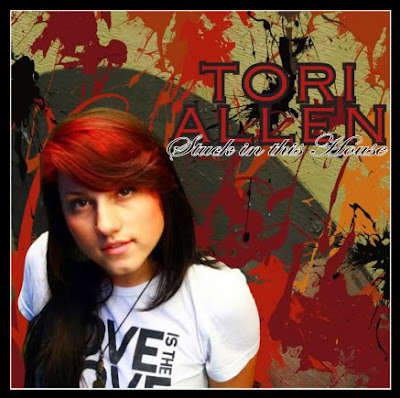 Round Rock, Texas singer/songwriter Tori Allen is just seventeen year old, but has already cut and released his first album. Playing music since the age of seven, Allen has always seemed a natural, from her creative flair to her voice. On Stuck Inside This House, Allen gets a bit caught up in the complicated trappings of youth on the verge of adulthood. While this muddies the waters as sometimes the expression and the intent don’t quite mesh, Allen shows sincerity and potential that is hard to ignore.

Stuck Inside This House opens with Everytime, a maudlin rocker that's decent but a bit weak for an opening track. This One's For Me picks up the energy a bit in an acoustic/electric arrangement accented by heavily distorted guitar. The underlying backbone of the song, however, has the same maudlin feel as the opening track. Maudlin here translates into a vocal line that borders on listless at times. Allen's voice is listenable; perhaps a bit heavy in tone for a Pop/Rock singer but decent, but it's certainly not enough to overcome Allen's unenthused approach. Meghan's Song gives the same impression, although there's definitely more heart in this tune, even if it doesn't translate as well as it might. Allen gets swept up in a bit of back alley blues for Mr. Devil, offering up the best performance on the album thus far. Allen's given herself permission to let go just a little bit here, and it works splendidly.

On the acoustic version of I Don't Want To Lose You, we get Tori Allen at her most essential: Just Allen and guitar. This cut feels a bit rough, almost like a one-off recording. It works on sincerity but isn't terribly polished from a recording standpoint. Me And My World sets a slightly grittier tone, but really doesn't work all that well. Allen's voice is pleasant enough, but she just doesn't display a lot of dynamic reach, making it much more likely for one song to sound like the next. A Beautiful Life has a somewhat flat feel it that belies the title. Allen recovers somewhat on The Letter, but there's a rough, unfinished feel here that isn't stylistic. Allen closes out with an acoustic take on Me And My World.

Stuck Inside This House is both title and metaphor here; Allen is caught in an alt-Rock singer/songwriter sound that doesn't necessarily suit here. Allen's voice is enjoyable, but runs into tone and even pitch issues at times throughout the album. Her delivery is a bit heavy for a non-belter, and Allen struggles with contrasts - essentially maintaining the same volume and intensity throughout. From a songwriting perspective the album is average; listenable but not exciting. Tori Allen has a fair start here, and I sincerely hope she continues to strive for her sound and writing voice. It’s there.

You can learn more about Tori Allen at www.myspace.com/victoriaallen2. You can download tracks from Stuck Inside This House on MyMusicSite.com. Keep checking Allen’s MySpace page for additional availability.
Posted by Wildy at 5:00 AM