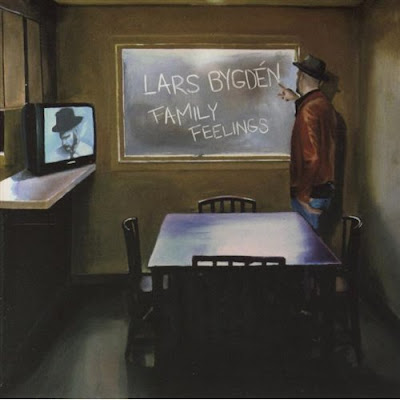 Sweden's Lars Bygden has known his fair share of success already. As lead singer of The Thousand Dollar Playboys, Bygden was a crucial part of two critically acclaimed albums from one of the seminal bands in Sweden's Alt-Country movement. His debut solo album, Trading Happiness For Songs, won him a 2006 Swedish Independent Grammy as Best Singer/Songwriter. Personal tragedy in the form of a loved one's bout with cancer informed Bygden's writing for his sophomore effort, Family Feelings. Bygden wrote this album for himself, more as a means to process and overcome his own fears and anxieties from watching someone he loves go through so much. The end result, however, is a concept album about darkness that is so personal it's universal, transcending the individual pains and fears of the writer to become a comment on human suffering and perseverance.

Bygden opens with the title track, a desolate, dirge-like meditation dressed in Country/Americana overtones. Into The Twilight recreates the slide into chaos our internal life can take when the rug is pulled out from under us. Bygden's clear, honest voice is refreshing, and his style of delivery is easy on the ears. Don't Make A Sound finds Bygden drowning his sorrow. The Daughter reflects a less-than-perfect parent-daughter relationship with a child grown to adulthood. The songwriting here is excellent, from lyrical content to composition and sound. Bygden's Americana stylings are sure to grab him some attention. Today & Every Day is a devotional written from the depths of sorrow; clinging to the one thing that's important - the person who could be taken away. There's a tragic beauty in the musical simplicity and emotional complexities wrapped up in this song that's stunning.

CT-Scan finds Bygden on the precipice of knowledge, still fearful of the outcome but finally at a point where a course can be charted. The song reflects intense vulnerability and fear alongside a love that overcomes both of those liabilities. The melody is a thing of beauty and the song is touching, particularly so for anyone whose ever gone through something similar. Good Times finds Bygden longing for a simpler time when bad things didn't happen to people. It's a surprisingly upbeat, "glory days" tune that will get listeners moving around a bit and serves as a positive counterpoint to the darkness that runs throughout Family Feelings. Therapy skirts the pounding surf of darkness that rests inside, drawing on all of the elements that create dysfunction in a human being years on. Surrounded by acoustic guitar and a haunting, gypsy-style violin, the song twists and turns just like the labor moans of a psyche in pain. Family Feelings closes with the eponymous Outro, a call to recapture all that's been lost and place a priority on the things that are important.

Family Feelings is a well of emotional riches in song, from the depths of despair to the jubilation of overcoming and even the hope of making tomorrow better than yesterday. Lars Bygden has crafted a sensitive song cycle full of engaging melodies and subtle, comfortable arrangements to wrap around a tragic and ultimately triumphant story. Just a warning, if you or someone you love has fought cancer, the weight of this album may be a lot to bear, but it's a worthwhile experience.

You can learn more about Lars Bygden at http://www.larsbygden.com/ or www.myspace.com/larsbygden. Family Feelings is available digitally through both Amazon.com and iTunes. CDs are available through the Buy link of Bygden’s web site.
Posted by Wildy at 5:20 AM