Review: Ne'er Do Well - Mistakes Were Made 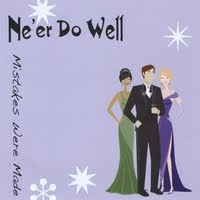 Cincinnati's Ne'er Do Well might claim prophetic or even healing abilities for their music once in a while, but they won't put in print or cop to the quote, so we'll have to stick to the music itself for inspiration. Ne'er Do Well's debut album even smacks of political damage control with a title like Mistakes Were Made.

Mistakes Were Made opens with the gentle, generic rock of Lucky Day. The song lives on a strong melody, but is just a little too soft around the edges to have significant impact. Think Gin Blossoms light. Everything's Chicago is a meandering tune that really doesn't go anywhere; it's more of a neutral-to-pleasant diversion. Never Can Tell is the catchiest songwriting on the disc, and is followed by the intriguing Half. Half is mildly catchy with a self-diminishing theme and an unusual vocal mix. These two songs are the collective highlight of the album. Ne'er Do Well seems to have a hard time finding their way for much of the rest of Mistakes Were Made, culminating in the gimmicky Homeless Romantic, which nearly qualifies for novelty status. Ne'er Can Tell rebounds a bit on the final track, the upbeat rocker Feverfew, but many listeners might not make it this far.

Ne'er Do Well starts off slow peaking early on two really well-written and well played tracks and then struggles to get back there for the remainder of Mistakes Were Made. This is a band with some real potential as songwriters, as shown on Never Can Tell and Half, but something gets in the way for much of the album. I'd recommending checking out streams of this one before committing to buy. I suspect many buyers may simply opt for inexpensive download of tracks rather than the whole album.

You can learn more about Ne'er Do Well at http://www.neverdowellmusic.com/. You can purchase Mistakes Were Made on CD or as a download from CDBaby.com, or download the album or individual songs from iTunes.
Posted by Wildy at 5:00 AM