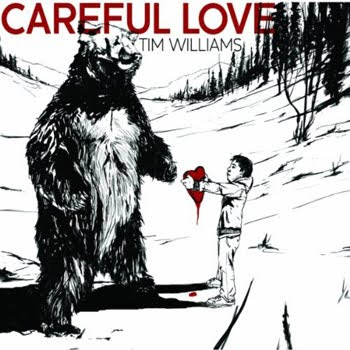 Tim Williams appeared on the Brooklyn music scene in 2007 as a coffeehouse troubadour, as documented on his debut album, When Work Is Done. Williams felt on top of the world, but things took a darker turn in 2008, when Williams underwent open-heart surgery. Ever one to persevere, Williams reinvented himself in 2009, going to Los Angeles for the first time, falling in love, and discovering within himself a more eclectic/electric sound. On top of this, Williams had significant real life experience to write about, and channeled all of these disparate energies into his sophomore album, Careful Love.

Williams opens with I Hit Another Wall, a testament to his survival over the adversity of the past year and a hopeful look to the future. The upbeat tune has a slightly messy feel, unvarnished and honest in its simplicity. Williams' muse is a bit darker on Ozone Street, a moody and nervous paean to breaking out of hopelessness. It's all wishful thinking in this case, as the escape isn't, but the song is intriguing. Oceans returns to a much more positive feel, with cascading guitars working a rip-tide to pull the listener along. Oceans is a love song, of sorts, drenched in layered sounds that create an inspiring musical canvas for a simple but memorable melody.

All In is a heartfelt and touching love song that is serious Mix Tape material. Williams captures a sense of need that isn't desperate but content and declares himself without a safety net in one of the best pure love songs I've heard. Love Hate gets to the heart of ambiguity with a certainty that's almost ironic. Murderous Air takes an almost uncertain vocal delivery and wraps it up in a layered, full-sounding arrangement. The result is a pretty but fragile down-beat Pop song that's almost ethereal at times. 8x10 is great songwriting. Williams' voice warbles and wavers through an emotionally vulnerable vocal line while his band smoothes the path. The backing/co-vocalist is a great addition. What a great Pop tune. Williams closes with I Want To Die In California, a macabre waltz that's surprisingly full of an adoration and respect you wouldn't gather from the title.

Careful Love is intriguing. I'll be the first to admit I'm not a huge fan of Tim Williams' voice, yet it seems to work for him very well. Williams doesn't try to do too much vocally, sticking to somewhat limited (but often memorable) melody lines while building enough layering into the recording to shepherd his vocal flaws. As a songwriting, Tim Williams is very talented, and I honestly hope we hear more from him down the road. Williams is a bit off the beaten path, but it's an interesting trail to follow.

You can learn more about Tim Williams at http://www.tim-williams.net/ or www.myspace.com/timwilliams. Careful Love may be purchase as a download from either iTunes or Amazon. Hard copy versions on CD exist but may be difficult to find.
Posted by Wildy at 5:10 AM