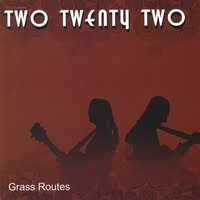 Two Twenty Two might be the best kept secret of the Southern Ontario music scene. Warren Muzak is a talented multi-instrumentalist who previously served as lead guitarist for The Misunderstood before embarking on a solo career. In the process of playing gigs he met Amanda Brewer (nee Weiss), a country-flavored singer/songwriter who spent a decade singing in cover bands and writing material for artists such as Soma Sonic. When Muzak and Brewer met and began writing together they found a musical chemistry that is unique and highly productive. As Two Twenty Two, Muzak and Brewer have gained considerable critical praise for their live performances. Two Twenty Two's debut album, Grass Routes, rolled out in 2008 and was voted one of the best Indie releases of the year by American Homeplace.

Grass Routes opens with If It Ain't You, a country-flavored love song full of energy and angst. There's more of a traditional country flavor here than you might expect, and Brewer and Muzak's voices mix admirably on the song. Brewer takes the mic for Control, a melancholy song of love lost that sung with heartfelt emotion; Muzak crafts a driving guitar part that stands in perfect contract to Brewer's voice in the process. Alice is built on a fingerstyle guitar run that made me wish I still had my acoustic kicking around so I could sit down and figure it out. Muzak's voice is fit perfectly to this tune, and Brewer's harmony vocals add an almost haunting element to the tune. Passenger features Brewer on lead with assistance from Muzak. The vocals here are top notch, but it’s the songwriting that stands out. Passenger has some modern feel to it, but at heart it could have walked out of the American 1960's Rock Fakebook. The song has a classic Folk/Rock feel that's nearly transcendent.

White Lights might be the best of a new generation of road songs, trucker songs or whatever else you might want to call them. There's almost a Grateful Dead feel to this tune with Muzak on lead vocals. White Lights is my personal favorite from the album. Bedroom is a bit more upbeat, a song that will make you want to get up and move and clap your hands. Its Paul Simon meets Rusted Root with strong lyrical content and an arrangement that features tons of movement. All About Love is one of those rare love songs that goes much deeper than boy crushes on girl (or vice versa). The song focuses on the transformation that a relationship undergoes over time where the mundane tasks grow to be done out of love rather than out of a need for something to do. Couples goes to familiar places they've always gone more because it's a part of the foundation than a place they need to be. It's an amazingly subtle and deep song that may take a few listens to really sink in.

You Can't Know goes at the other side of love, the pure emotional gotcha. Amanda Brewer reminds me strongly of singer/songwriter Denise Culhane on this tune. Two Twenty Two takes us on a compelling ride in Forest Fire, a driven rocker based in social dysfunction about someone who leaves personal destruction wherever they've been. Brewer seems a bit mismatched on the vocal on this tune, but it's definitely a song worth checking out. James St. Station is a song about making the choice between blazing your own trail or giving up your life for the sheepish existence of cubicles and public transportation. It's a call out to anyone of an artistic bent to choose before you're trapped in a path you don't want. Two Twenty Two closes out with the piano ballad No Good, where Brewer sings cynically of the chances of a new love not ending in disaster. There's a clear desire here for things to work, but the wounded heart of the narrator can't believe; she also can't pull out of the nosedive, for good or ill. It's a wonderfully personal and emotional accounting in song of a heart/head conflict.

Grass Routes is a stunning debut for both composition and lyrical content. Warren Muzak and Amanda Brewer are each quite capable on their own, but there is a sort of musical alchemy that occurs when their voices and songwriting skills join and work together. Two Twenty Two have their flaws, but it’s that aura of perfect imperfection that makes them so compelling. With the mix of Country, Rock and Folk, there isn't an easy pigeonhole or genre to classify Two Twenty Two under, but however you tag them this is a band you need to get to know. Put Grass Routes on your must-hear list and don't let it languish!

You can learn more about Two Twenty Two at www.myspace.com/twotwentytwotunes. You can purchase Grass Routes on CD from CDBaby.com.
Posted by Wildy at 5:05 AM

These guys are great live. I highly recommend both the album and catching a live performance.